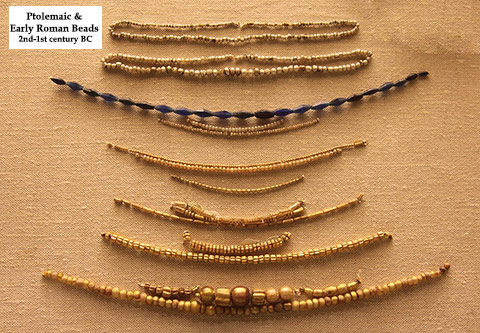 Beads are one of the earliest forms of decoration known to man and the history of beads goes back at least 100,000 years. In those early times humans adorned themselves with very simple beads made of pierced teeth, bones, stones, pearls, and shells. As human society evolved the beads became more sophisticated and took on additional meaning, featuring smoother forms, engraved symbols and various representations made to show the wearer's status, protect the wearer from evil forces, or bring good luck. Eventually, as human civilization and knowledge advanced, man-made materials came into use in bead-making and were valued higher than natural ones. The earliest known examples of handmade beads were created in Egypt from faience and glazed steatite over 5,500 years ago. It has been argued by historians that the process of making faience (a form of ceramic pottery covered with special glaze) led to discovery of glass-making, where sand was added to the glaze prior to firing and as a result glass was obtained on top of the glaze.

Glass beads were first created about 3,500 years ago in Egypt and Mesopotamia, and ever since glass bead designs and bead-making techniques grew increasingly complex. The ancient glassmakers were initially making glass from just three simple components - sand quartz, soda ash and limestone. Sand was collected from the shore and was not pure, containing traces of other minerals. Therefore, glass came out randomly colored depending on the minerals found in the sand. Then the early glass artisans learned to purposefully add various minerals such as iron, copper, cobalt, manganese, and even gold to the glass mixture in order to obtain glass articles in various colors. Eventually by 1350 BC complex chemical processes were used to create opaque glass, colorless glass, and even mosaic (millefiori) glass, using canes with multiple layers of colored glass. Special glass furnaces were constructed to facilitate the glass-making process and satisfy the growing needs of the society's elite for glass beads, jewelry, and vessels. 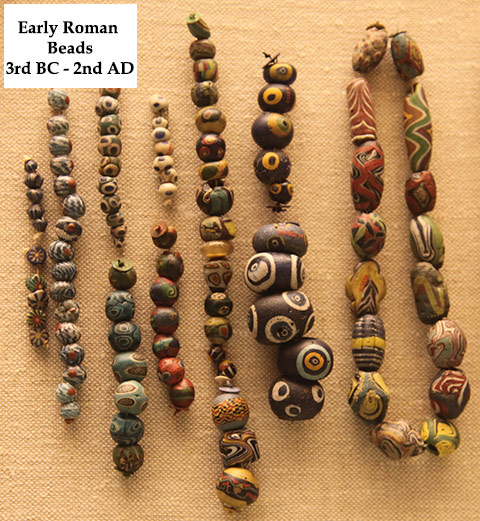 During the 1st century BC, when Roman Empire conquered Egypt, Roman masters learned the glass-making craft. They introduced hotter and larger ovens enabling the production of more fluid glass mixture. Then Romans started using glass blowing pipes, which revolutionized the glass-making process and made it possible to produce large quantities of glass articles relatively cheaply. This combined with multitude of Rome's trade routes used at the time made glass pieces very popular and accessible to much wider audience than before. In this period Romans used sophisticated glassmaking techniques, including Millefiori, to create not only beads and tableware pieces, but also glass windows and mosaic tiles for their baths, floors, fountains, and walls. In particular Romans used beautiful Millefiori beads to trade far and wide including places as remote as Central Africa, China and Scandinavia. Roman glassmaking reached the farthest corners of the Empire and flourished until about 400AD, when the Roman Empire started to disintegrate until it finally fell in the late 5th Century AD.

As Christianity took hold in Europe, with its emphasis on austerity and disapproval of vanity, European culture and traditions started to change. Self-adornment was frowned upon and glass bead jewelry was no longer popular. In that period glass beads were made in much smaller quantities and used mainly for rosaries. Not much is known about glass-making and bead-making in the Middle Ages except that glass bead-making went on in various corners of the former Roman Empire, but on a small scale as individual artisans or small family enterprises continued to supply glass beads and glass mosaics for religious and fashion purposes. However, these beads were relatively simple as many of the Roman glass-making techniques and methods were gradually lost.

The decline of the glass bead-making in Europe continued until the 12th century when the growing power of the Venetian Republic and its commercial success gave rise to the revival of various forms of arts and crafts in Venice. Glass-making in Venice got established on the industrial scale supported by the formation of the glass-makers guild with many privileges and honors bestowed upon its members, and aided by continuous innovation in search for lost Roman secrets. The first glass beads produced in the Venetian Republic were most likely used for rosaries, and an ancient document was found specifying that a large quantity of them was exported from Venice in 1338. These early Venetian beads were most likely produced by dripping hot glass onto a wooden or iron rod covered with special non-stick paste. 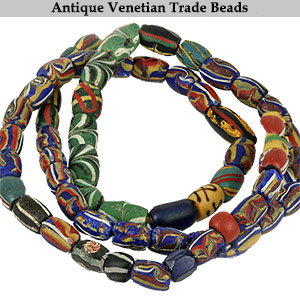 Later in 1470 Venetian artisans (who were by then moved onto Murano Island) started to create hollow cylindrical glass canes which were cut and refined by grinding or heating. The use of these canes made glass bead making much easier and facilitated re-discovery of many Roman techniques, including Sommerso, gold and silver leaf, and copper-infused avventurina. In the 15th century Venetian glass masters re-discovered Millefiori technique (aka Murrine or Mosaic) and started to make Millefiori beads, which were used in jewelry, bowls, vases, interior embellishments, but most importantly as currency to trade with places as far away as North America and Africa. The most famous of Venetian Millefiori beads is Rosetta bead (aka Chevron bead) - a prized bead invented in 1480 by Marietta Barovier, the daughter of Angelo Barovier from the famous namesake Murano glass-making family. Rosetta beads became wildly popular and were used extensively for trade from that point onward. Rosetta bead was made from a hollow glass cane, which had a pattern of a twelve-pointed star in it for the whole length of the cane. In those early times Rosetta typically had 7 layers of blue, white, and brick-red colors and 6 facets. Many merchants and explorers, by some accounts including even Christopher Columbus, traded these beads for important goods or privileges, such as the right of secure passage through dangerous waters. The high demand for Murano Glass beads due to trade eventually prompted the Venetian authorities to let glass-making expand beyond Murano In 1592, and the number of glassworks quickly grew. There were only 24 glass-making factories on Murano in 1525, but by 1606 this number increased to 251.

Fueled by the commercial successes of Venice, innovation in bead-making continued and in the 16th century lampworking method of glass-making was established, which eventually became very popular among glass-makers. This method allowed them to produce beads by using small animal-fat lighted flame, and they could now work everywhere, even at home, which was particularly convenient for women. Thus by the 18th century many women started working in bead-making industry. The industry kept growing due to the period of continuous geographical discoveries and burgeoning trade, and in 1764 the output of Venetian Glass bead making industry was over two million pounds of beads per year. In 1788 there were already 680 lampworking bead workshops just in the city of Venice supplied by multiple local glass cane-making enterprises.

After Napoleon's defeat of Venice in 1797 and the accord transferring Venice and all her possessions under Austrian rule, Venetian glass-making industry greatly suffered and declined. Supported by the Austrians, other glass-making centers quickly developed using Venetian knowledge and experience, most notably in Bohemia. By the end of the nineteenth century Bohemia became a well-established center for glass bead production. Production of high-quality crystal also flourished in and around Bohemia and multiple crystal bead making firms were established in the region, including world-famous Swarovski. 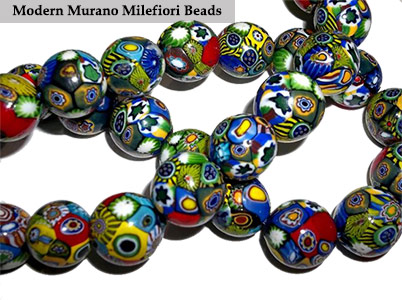 However, Venice managed to not not lose its significance. In late 19th and early 20th century, as Venice sought to regain some of its past fame, Venetian glass-making industry experienced revival with many of the old techniques brought back to life. Specialist firms such as Salviati, Borovier and Toso, and Moretti, which were established by the masters from the old glass-making dynasties, led the revival of Venetian glass industry. The bead production came back as well. In fact between the end of the 18th century and World War II enormous quantity of glass beads was produced in Venice, which once again were used for trade. For example in 1886 alone one company Ferro & Marinetti received an order for 251,000 Rosetta beads. These beads were now in high demand due to Germany's flourishing trade with faraway places such as West Africa and India. After the World War II bead production diminished again as their trade use came to an end, and in the later years of the 20th century glass beads were made in Venice and on Murano mostly for use by the local and international fashion industry.

Today, as in the years past, Murano's famous glass beads have no equals due to their amazing illustrious colors, elaborate designs, and exceptional polish, making them highly desired by stylish women all over the world. Despite globalization and Italy's economic challenges, innovation is alive and well on Murano, and modern trends are incorporated into the bead designs by the Island's skillful and talented glass masters. The famous Murano Island has re-invented itself multiple times throughout history, every time emerging as the glass-making capital of the world, and it will no doubt continue to surprise us with beautiful beads and glass creations for years to come.