In Short: To achieve Fenicio or festooned effect, the glassworker wraps the incandescent glass threads with a thin pontil, and then, while the object is still hot, he combs the threads with a hooked tool, called a "manereta". Then, once the threads are merged into a single piece of glass, the obtained decoration is similar to festoons or feathers. 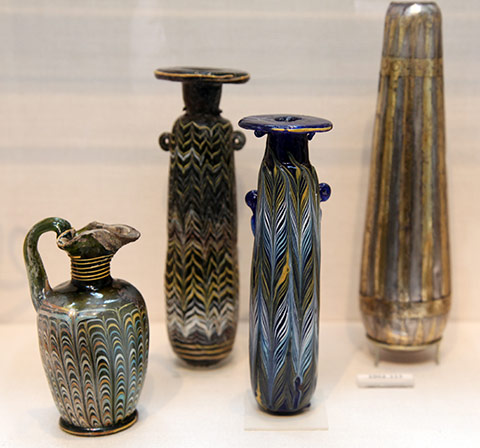 Fenicio, also known as Ploomed, Festooned, or Feathered Glass, is one of the oldest decorative glass-making techniques, having been used by ancient Phoenicians and Egyptians. In an effort to reproduce ancient glassware finds and bring back the skills known to ancient civilizations, Murano Glass artisans have been searching for a method to create the distinctive colorful festooned decorations seen in many archeological finds. Finally, in the sixteenth or early seventeenth century these efforts ended in success. The recipe was found.

In order to create the festooned decoration reminiscent of a bird's plumage, the glass artisans first created a blown glass object and then applied vitreous paste of another color in threads around it. The next step is to go through these threads with a special comb-like tool called manereta or sgraffon, which has irregular teeth, in order to create wavy or feather-like designs on the surface of the glass object. After the combing is done and the designs are created, the object is re-heated, rolled on a special flat surface called marver, and then blown again.

Fenicio technique has had enduring popularity ever since it was rediscovered by Murano's talented glass masters. It has been used in cups, bowls, and vases, as well as in sculptures and figurines. It is especially fascinating to see early examples of Ploomed or Fenicio glass items uncovered by archeologists in the Middle East, which are now on display in many museums around the world, including the Metropolitan Museum of Art in New York, the Getty Villa in California, and of course the Murano Glass Museum in Murano, and realize how similar they are (albeit a bit less radiant) to the Fenicio Glass created by Murano Glass masters today.

If you are a fan of Fenicio Glass, we have some of the finest examples produced today available HERE