In Short: Chalcedony or Calcedonio glass-making technique was first used in Egypt during Roman times, and then it was re-discovered in Murano in the fifteenth century. The secret of the technique was then lost again and subsequently re-discovered by Murano master glass-maker Lorenzo Radi in the later part of the 19th century.

In addition, prices of jewelry and decorative items made of semi-precious stones such as chalcedony, malachite, agate, and onyx were very high in the fourteenth and fifteenth century, and Murano's masters strove to offer a cheaper alternative with the same distinctive features of natural stones.

Hence Calcedonio or Chalcedony glass-making technique was invented in the middle of the fifteenth century. This technique involves mixing scraps of colored and white opaline or iridescent glass and Cristallo glass and fusing them together under high temperatures. Once the pieces fuse completely, various mineral oxides are added repeatedly to the glass mixture and dispersed to create unique color effects. These may include cobalt oxide to achieve blue colors, nitrate of silver for matte appearance, potassium oxide, and others.

Finally, the objects are blown from the mixture into the desired form, and characteristic color streaks obtained by using mineral oxides become even more pronounced as the glass curves during this process. 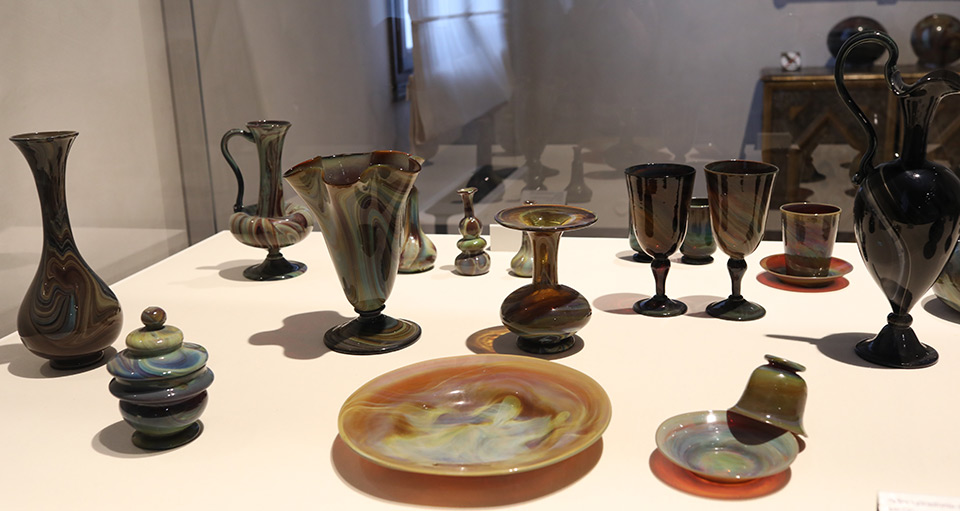 Chalcedony glass enjoyed great popularity among the wealthy within and outside Venetian Republic in the fifteenth and sixteenth century due to its exotic chromatic effects and the look that imitated expensive semi-precious stones. It was used to create cups, pitchers, goblets, bowls and various other tableware, as well as decorative pieces for the noble homes, such as vases and sculptures. Later during seventeenth and eighteenth centuries Murano masters started adding molten Avventurina glass to chalcedony vitreous paste, in order to add sparkly accents to the look.


As with so many Murano Glass techniques, the recipe for making chalcedony glass was lost at the end of the eighteenth century. Luckily, in the middle of the nineteenth century a glass master on Murano named Lorenzo Radi rediscovered the secret of making the chalcedony glass paste that was used to achieve the looks very similar to the ones created in the sixteenth century. A precursor to the chalcedony glass revival of the twentieth and twenty-first centuries, Radi's style focused on simple linear forms, letting the beautiful chromatic combinations and veined designs take the center stage.

Contemporary Murano glass artists took interest in the potential of chalcedony glass and Radi's designs, and have been creating contemporary art glass pieces in chalcedony techniques, which one may see in various galleries and private residences. This makes chalcedony one of the oldest decorative glass-making techniques that are still in use today.

If you like Chalcedony Glass, we have some of the finest examples produced today available HERE