In Short: Glass beads have been produced long before Murano Glass industry has emerged, and masters in ancient Egypt and subsequently Rome have been making beads for jewelry and decoration by first creating and then cutting up thin glass rods. In the fourteenth century bead production started up in Venice on Murano Island, and from that point glass beads have become one of the key products of Murano Glass industry.

Before their widespread use in jewelry and costume-making, Murano Glass beads proved very popular in trade with Africa, India, and the Americas. Such beads became known as "trade beads" as they were commonly used in place of money to buy valuable African and American commodities or even slaves.

The main types of Murano Glass beads are seed beads, chevron beads, and lampworked beads. While seed beads crafted from very thin cylinder rods of one color were commonly used for dress embroidery, chevron beads were mainly used as trade beads. Chevron Murano Glass beads which have flowery designs similar to Millefiori were invented in the fifteenth century by Marietta Barovier, the daughter of famous creator of Cristallo Glass Angelo Barovier. Then the big invention in the world of Venetian bead-making came about in the seventeenth century, that of the lampworked beads. 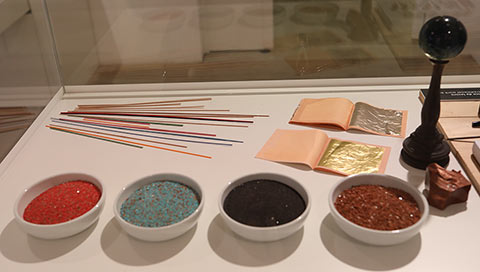 Creation of a bead in lamp-working technique has changed little since the seventeenth century, in fact only the flame source has changed to a gas-powered torch, but not the glass-making technique. It involves holding a glass cane over a flame with one hand, and holding a thin metal wire with another hand. The heated up liquid glass then drips onto the metal wire, and through rotating the wire and adding various touches such as gold or silver leaf, aventurine, enamels, or another layer of liquid glass decoration, different designs of lampworked beads come out. Murano Glass bead production has never stopped after it was initiated over seven hundred years ago, and was the only type of glass-making to continue on Murano island in the difficult years of the nineteenth century, when the industry was in existential crisis and almost folded up.

Beyond being a source of pride and worldwide recognition for Murano Glass, bead-making industry played an important role in the history of Venice after the fall of Venetian empire. Unlike the traditional Murano glass-making centered around the male-dominated workshops and furnaces, Venetian bead-making has attracted many local women, both from glass-making families and from the outside. Those who did not create the beads were often busy with threading beads for jewelry. In fact, Venice was full of women sitting outside their houses and also on campo's and beading all day long, even as recently as the first half of the twentieth century.

While we at GlassOfVenice do not sell individual beads to be used in jewelry-making, we do offer beautiful large-hole Murano Glass Charm beads in gold- and silver foil, Fiorato, Millefiori, and Avventurina techniques that can be strung on special individually sold chains and bracelets and are compatible with Pandora and Chamilia jewelry. You can see these Venetian beads at https://www.glassofvenice.com/murano-glass-jewelry/murano-glass-charm-beads.html