For connoisseurs of art glass, Murano Glass is all about ancient traditions, high-quality craftsmanship, and artistic heritage of Venice. But for the majority of people, Murano glass is the synonym for beautiful objects decorated with tiny colorful glass flowers – Millefiori, which in Italian means ‘a thousand flowers’. 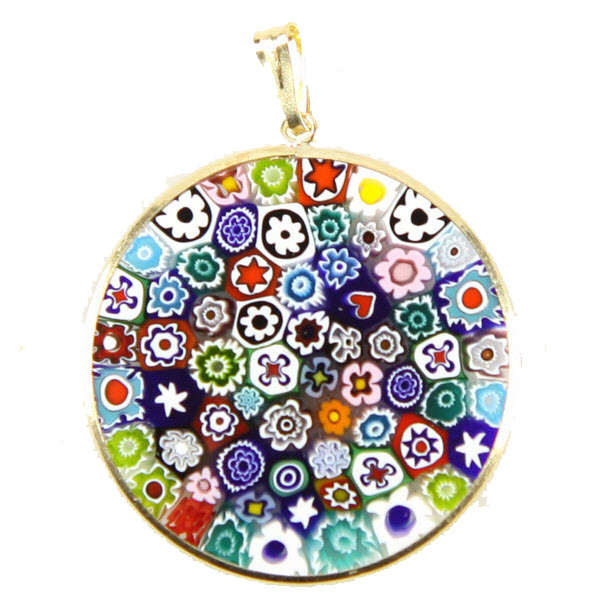 While Millefiori glass-making technique traces its roots back to ancient Egypt and ancient Rome, the term “millefiori” was first used to describe special mosaic-like beads by London glass-blower Apsley Pellatt, in his book “Curiosities of Glass Making”.

Today, the term Millefiori is used not only to describe colorful glass flowers, but the actual glass-making technique that survived centuries of changes of fashions and styles and is now popular on all continents. The knowledge of making glassware in Murrina or Millefiori glass technique was lost around the 18th century and re-invented by ingenious Murano Glass artisans in the 19th century. What every owner of Murano Millefiori glassware should know is that their precious Murano Millefiori jewelry, figurines, or vases have a long and interesting history. 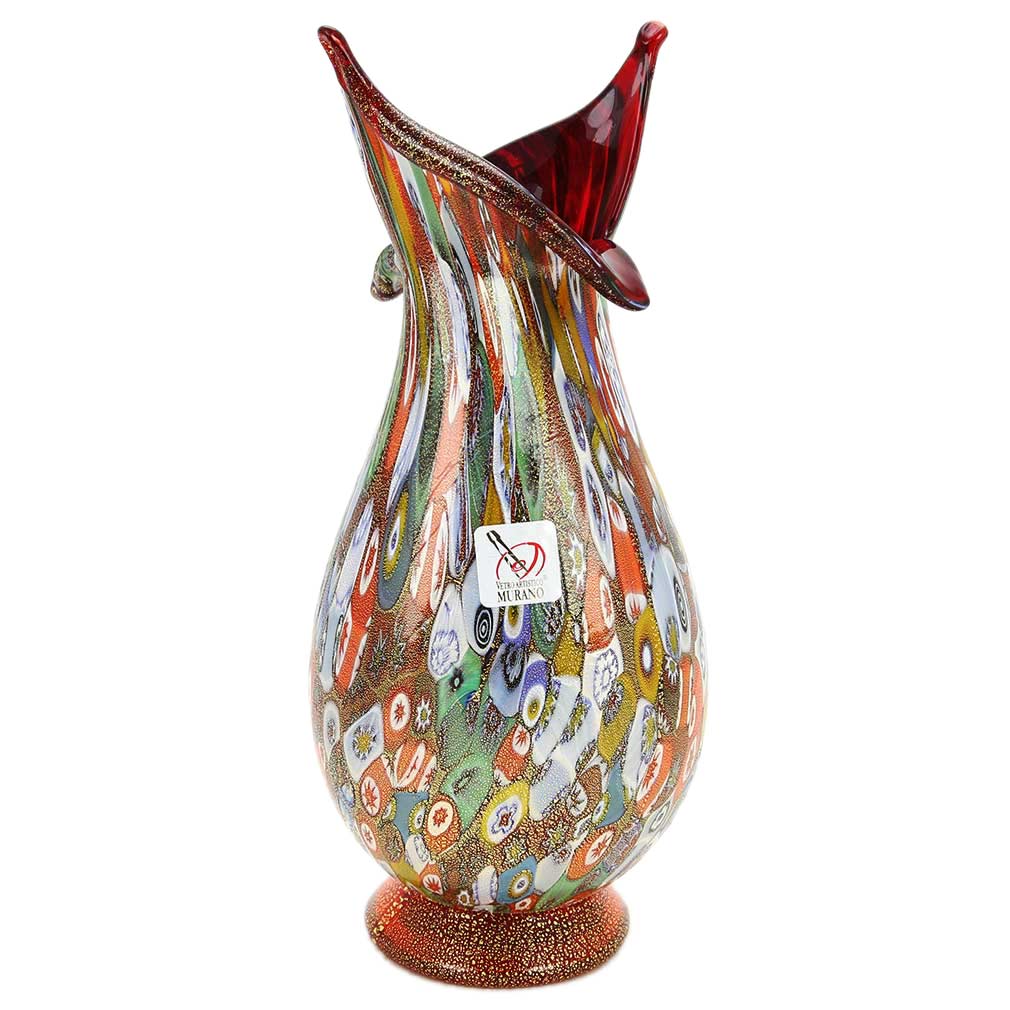 The path which this wonderful technique took until it came to Murano, where the glass blowers refined it and made it famous all over the world, is long and curious. It is believed that Egyptians first came to the idea to fuse different colored glass between the third and the first century B.C. After them, Phoenicians and Romans also came to the same idea. It is not known whether the Egyptian, Roman, and Phoenician glass masters influenced each other, or whether the same idea came to different artists in different countries independently. The oldest very well preserved Roman Millefiori beads were found by archeologists, who believe that they were made between 50BCE and 300CE.

Romans brought the technique to various regions of Europe and Millefiori glass rods were found on 8th-century archaeological sites in Ireland. Some millefiori-decorated jewelry was found in Sutton Hoo, the early 7th century Anglo-Saxon cemetery. Nobody knows how and why it happened, but after the 8th century, in the dark times when art was suppressed, the knowledge of making Millefiori glass was lost. Millefiori glassware was not made again until 15th century, when Murano glassmakers rediscovered it, or maybe reinvented it, and made it famous all over the world through Venetian maritime trade, where Millefiori beads were used as a currency. 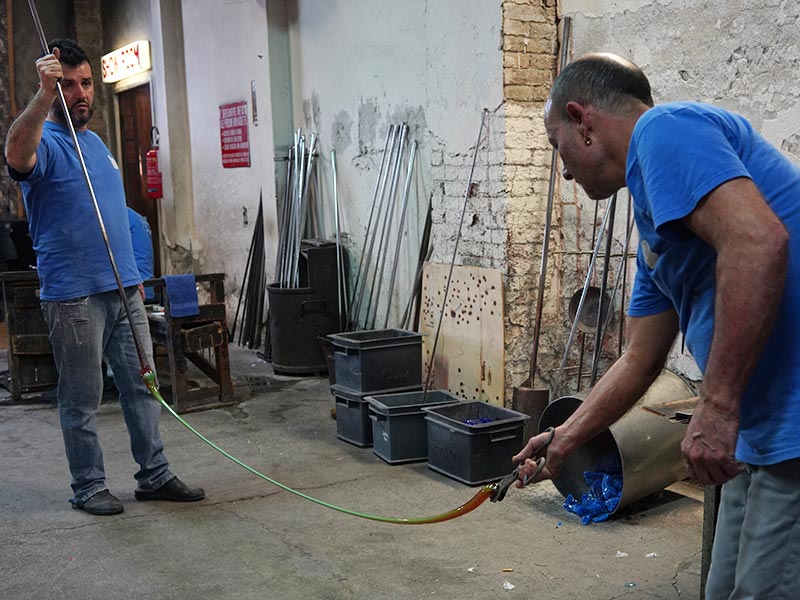 It is difficult to imagine that such complex and intricate designs like Millefiori decorations and beads start as thin glass rods called “murrine”. The layers of heated semi-liquid glass of different colors wrapped around each other are then stretched to the desired thickness while hot, making Millefiori glass canes. Then the master cuts each cane into fine segments, thus creating small cylinder-shaped millefiori pieces. The cross-section of each piece shows a flower-like pattern. The flowers look so real and vivid like they were created by nature, just for our pleasure. Once cooled, each ‘flower’ is fused into a hot glass object like a vase, paperweight, lamp, or is set in gold or silver and made into a Millefiori pendant, earrings, or other jewelry.

Although thousands of millefiori objects are made in Murano today, they are still made by Murano glassmakers entirely by hand, and each piece is unique. The technique is now used by glassmakers all over the world, but it is easy to recognize the amazing skills of Murano Glass artisans in the intricate and colorful pieces crafted with precision and passion. 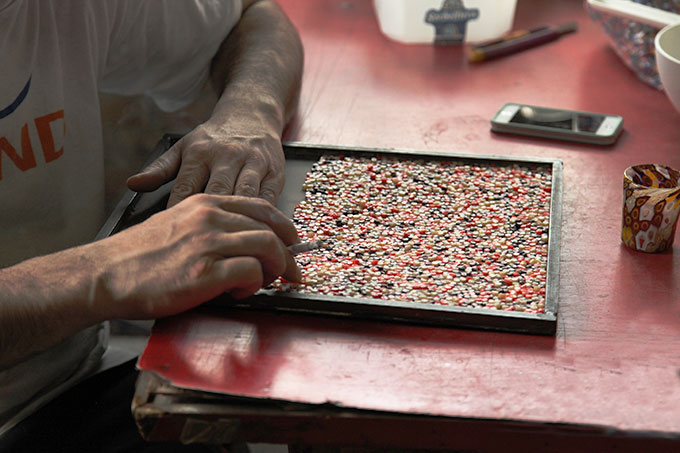 At GlassOfVenice.com, we feel that the handmade Murano Glass objects allow us to go back in time and capture the fragile beauty of Venice, and we are happy to share this opportunity with our customers worldwide. On our website, you will find the largest selection of Millefiori art glass available anywhere outside of Venice, from small inexpensive jewelry to large art glass vases and sculptures. We work directly with over 30 Murano Glass factories and workshops on Murano island in Venice, Italy, some of which specialize exclusively in making Millefiori glassware. Thee are family-owned factories, owned by the descendants of the very masters who re-created Millefiori Glass technique centuries ago from the Roman samples and gave the world another chance to enjoy the beauty of Millefiori.