When talking about Murano’s history in glassmaking, it is natural to find only the best of the best glass masters working on these precious and unique designs. Some of these stories are full of unexpected surprises, stunning beginnings, and eminent success. Such is the case of Venini, one of Italy’s oldest and most renowned glass masters of all times.

Born in a small town near Milan in 1895, Paolo Venini studied to become a lawyer but would soon change course when he crossed paths with fellow Italian Giacomo Cappellin. In 1921, the two Italian entrepreneurs opened their first glass factory in Murano, naming it Vetri Soffiati Muranesi Cappellin Venini & C. A third associate, Andrea Rioda, would later join the team. The idea was to reopen Rioda’s glass factory and summon back all of the company’s former glassblowers, taking advantage of the firm’s long history and know-how. Unfortunately, their plans did not go accordingly due to Rioda’s departing before the beginning of production. The partnership further dissolved after Cappellin decided to part ways in 1925 in order to launch another firm, taking many glass masters with him along the way. Venini, however, managed to reposition himself as one of Murano’s leading glass masters, renaming his company Venini & C.

From 1925 on, Venini developed his own aesthetic and soon defined his firm’s identity. He embraced innovative trends in the fields of art and architecture, bringing in talented artists from all over the world in order to work with them and create special limited editions. His aesthetic was nothing like the standard Novecento style everybody followed, instead he decided to translate his creativity into modern shapes and experimental textures. In spite of being known for his eccentric modernist designs, he also became famous for a refined and elegant style that quickly became a constant trait in every piece. This high quality in craftsmanship was only assured thanks to Venini’s personal inspection in every step of the production, setting high standards for quality and design.

Vittorio Zecchin was appointed Art Director of the company, producing ingenious designs that made the glass industry in Murano become a fashionable commerce once more. Zecchin’s designs were based on the most delicate and simple shapes, reminiscent of ancient vases, which turned out to be a strong contrast to the intricate designs of those times. During the late 1920’s, Venini’s brother Franco joined the team as well and did important research and innovation in the field of chemistry, creating unique colors exclusively for Venini, leaving the rest of the competitors behind. 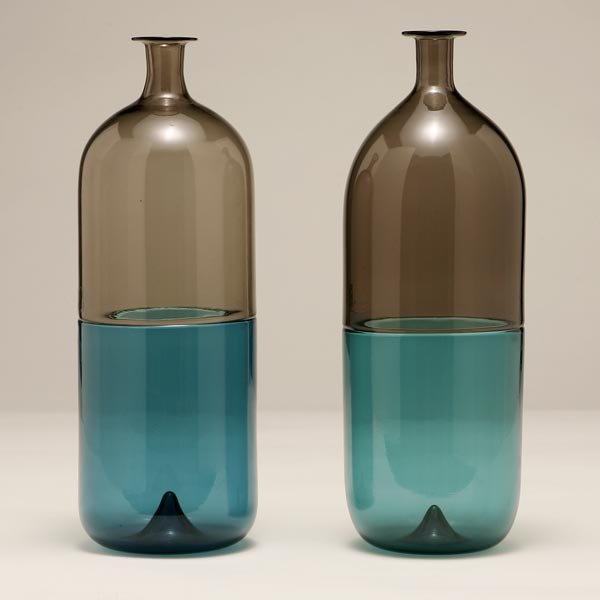 After Zecchin left the company, Napoleone Martinuzzi (a renowned Italian sculptor) became the new Art Director for Venini & C. By 1928, he began creating and producing his own designs, many of them considered Venini marvels and masterpieces, such as the vetro pulegoso technique, the glass paste he so often used to produce small glass animals, and the incamiciato (double layered glass technique). Martinuzzi’s period as Art Director would not last long, as Italian architect Carlo Scarpa would soon take over the role in 1932. Scarpa’s faithful collaboration with Venini lasted for ten years, bringing out new concepts and renewing techniques, designs, and coatings. Some of the coatings for glass surfaces Scarpa reinvented were the hammered surface, the smoothed surface, the incised surface, and the corroded surface. In terms of techniques, he perfected many of them among which we find the laced, the brush stroked, and the submerged techniques. Older techniques were also brought back, making Venini’s designs even more exclusive through the use of the half filigree and the milk-glass techniques. Carlo’s son, Tobia, also had the honor of working for Venini, reaching fame thanks to his Occhi (eyes) series. While his father’s creations represented extreme elegance, Tobia’s designs spoke of nothing but the most exquisite and graceful psychedelia of the 1950’s.

After a necessary pause in the 1940’s due to complicated war times, Venini retook the reins of production, hiring renowned Milanese architect and designer Gio Ponti. His designs were colorful and rare amongst the rest of Venini’s glass pieces, but Ponti’s collaboration helped the firm get back on track after its slow recovery after the war.

The 1950’s were possibly Venini’s best years ever. Those years were full of contradictions for the glass industry. While the high inflation forced glass artists to produce less sophisticated and exclusive designs, Venini hired a famous designer that would quickly become the leader of Murano’s Golden Age: Fulvio Bianconi. Bianconi was an Italian illustrator and caricaturist who started working for Venini in 1947. His exceptional creativity brought life and color to the glass industry; he injected energy and modernity to every glass piece he designed. Every shape he designed seemed to be filled with sensuality and natural fluidity. Bianconi gained world recognition for pieces such as his fazzoletto (handkerchief) vase, his mermaid torsos and his patchwork pieces. Some of his well-known techniques include the scozzese (scottish), forato (perforated), and fasce (bands). There is no need to wonder why Bianconi’s glass works are amongst the most coveted and appreciated around the world. After Venini’s death in 1959, the company was passed on to his children and grandchildren, until it was later sold in 1985.

Venini’s history, however, has not been blessed with only good news. In 1972 a terrible fire caused great damage to his furnaces and archives, causing the loss of almost all of the company’s records. Even though Venini’s glass masters tried to recover some of the lost techniques and designs, the quality did not quite match the original pieces of earlier times.

The repetition of older original designs – whether because it’s customary or because the firm keeps trying to recover older archives – usually represents a difficulty for Venini collectors. As much as the quality and design may be based on authentic pieces, the commodities and processes marked by today’s technology reflect a great change in Venini’s glass pieces. Nonetheless, Venini & C. still stands for one of Murano’s greatest and most respectable glass firms, representing impeccable quality and innovative Italian style.