Colorful, grandiose, and one-of-a-kind Venetian Carnival of 2017 is over. Let’s remember the most important moments of this celebration of Venice’s beauty, tradition, and history that brings millions of people to Venice every year. 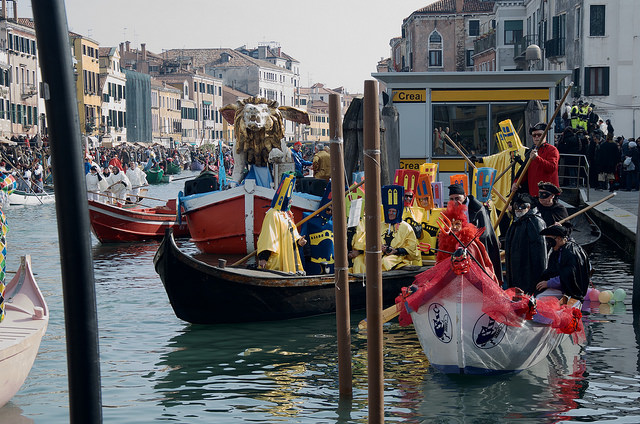 The grand carnival opening ceremony started with Venetian Festival (Festa Veneziana), which took place on the banks of one of the most picturesque Venetian neighborhoods -Cannaregio. This was a magnificent evening show of unique floating structures with music, dancing, local food specialties, and lots of positive emotions. The canal banks were lined with people watching the amazing floats go by and trying local Venetian gastronomic specialties. Festa Veneziana continued on the second day of the Carnival in a typical Venetian fashion with a very impressive boat parade along the Grand Canal. Apart from watching richly decorated gilded boats and even brighter costumes of the boats’ passengers all the guests were treated to wine, the best creations of Venetian and Italian cuisine, and of course various entertainment. 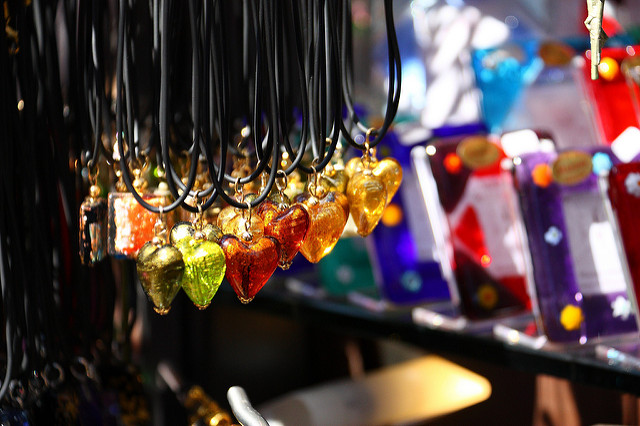 Lido in Love was an event dedicated to Valentine’s Day on February 14th. The island’s main square Gran Viale was decorated for the occasion with thousands of red balloons in the shape of a heart. This special event during the Carnival took place at the Love Market in Piazzala Santan Maria Elisabetta. Special booths with Carnival props such as masks and costumes were set up at the square for adventurous couples to take selfies. The Venetian couple masks parade later in the day brought the true carnival spirit to this celebration of love and romance for those lucky enough to celebrate St. Valentine’s in Venice – the most romantic place in the world. 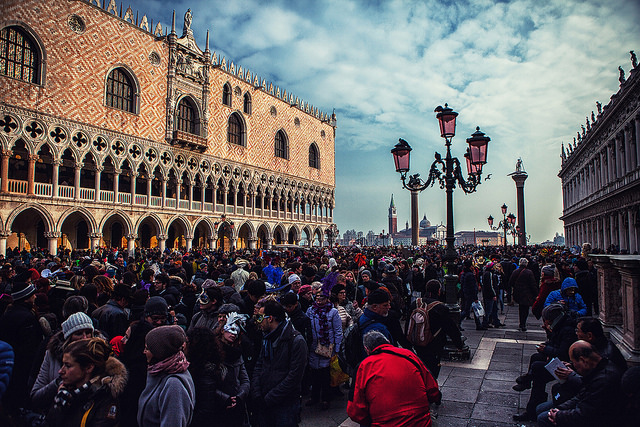 Another big event was traditional “Festa delle Marie” dedicated to freeing of beautiful Venetian girls from the pirates. The history of this celebration is obscure and mired in legend but most sources point to the fact that starting some time in the ninth century Venice had a custom of celebrating the catholic day of purification of Mary, February 2nd, by selecting 12 of the poorest girls whose weddings were scheduled for that year and providing them with princely wedding celebrations. Sponsored by the church, this tradition involved dressing the girls into expensive clothes as well as giving them rich dowry along with throwing grand celebrations with the doge. Once around year 943 during such an occasion pirates broke into the church of San Pietro di Castello and kidnapped the girls along with their rich dowry and gifts right before the eyes of shocked Venetians. The Venetian fleet headed by the Doge himself quickly organized the pursuit, caught the pirates, retrieved all the stolen articles, saved the women, and threw the pirates overboard. To commemorate this occasion the Doge instituted the official annual Festa delle Marie, or Feast of the Mary’s. The feast involved finding and choosing 12 most beautiful girls among the poorest inhabitants of Venice, 2 from each Sestiere, and naming each of them Mary. Nobility was invited to sponsor this event and provide girls with beautiful clothing and fine gifts. A boat parade along Venice’s canals was held to celebrate the Feast, special religious cervices were held in churches across the city, and fun celebrations with food and music were organized for Venetians. The celebrations went on for several days, and the occasion was one of the most eagerly awaited, lavish, and expensive celebrations in Venice. Eventually in 1379 Festa delle Marie ceased to exist due to rowdy behavior during the party and inappropriateness of the nature of the celebrations to the solemn spirit of the day of the purification of Mary.

The celebration was reborn in 1999 and became one of the key events of annual Venetian Carnival. Modern-day Festa delle Marie involves the procession of twelve young and beautiful girls selected in advance of the Carnival, surrounded by others in historical costume, which parades from San Pietro di Castello to Piazza San Marco. Eagerly viewers gather on Piazza San Marco to see the introduction of Marie, which concludes the celebration. This girl, the winner of the competition of Mary’s then becomes the “angel” to take the flight of the angel during the next year’s carnivale. 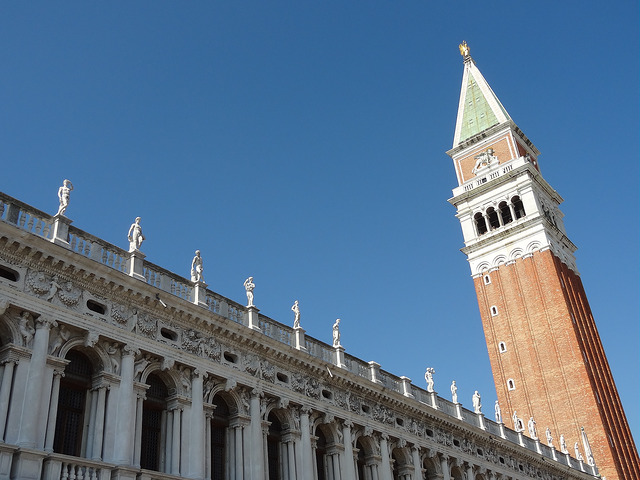 On Piazza San Marco on February 19th carnival aficionados could witness the traditional “Flight Of An Angel”. The role of the angel was awarded to Claudia Marchiori, the Marie of 2016. The “Flight of the Angel” goes back to the historical Venetian tradition when an incognito guest of Venice would descent on a rope from the Campanile of San Marco down to the piazza, offering homage to the Doge. The angel is always the winner of the previous year’s Festa delle Marie. The winner of the 2017 Festa, Elisa Costantini, will become the Angel for the Carnival 2018. 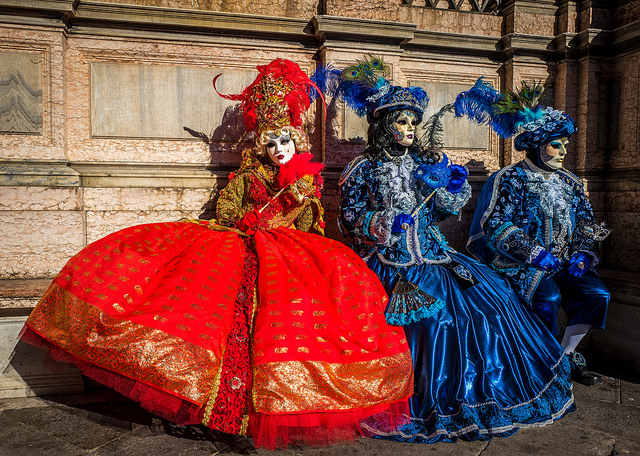 The beating heart of Venice, Piazza San Marco, became the center of yet another important event of the Venetian Carnival – the Competition for the Best Carnival Costume. The competition judges announced the winners in two categories: the best costume and the best mask. Anybody can take part, all you need to do is just file and submit a special form, deck out in a fabulous carnival costume and show up for the contest. You will then be given a change to walk on stage showing off your costume, but be prepared for the tough fight if you wish to win. The participants costumes are extremely elaborate, featuring gorgeous detail and decorations, complete with plumage, furs, wigs, elaborate hats, and of course gorgeous masks.

It is hard to imagine more grandiose and amazing celebration than Venetian Carnival. It is a mix of the old and the new, born from unique Venetian traditions with roots deep in the centuries past, a mix of romance and adventure, which attracts people of all ages and walks of life. If you never visited this celebration of life, history, and beauty we highly recommend putting it on your bucket list and experiencing these events first-hand.

Venice is renowned for its beauty, history, and art. No wonder that many visitors want to bring home a memory of this magical city, along with original souvenirs for family and friends. Gifts are a wonderful way to show loved ones that you care, even when you are far away from home, and they’re also an excellent way to express the beauty of a place to someone who has never visited it.

Fortunately, Venice offers many gift choices to travelers looking for unique and beautiful gifts to take home. Our recommendations center around traditional artisan goods that have been crafted in Venice for centuries using original techniques and that embody the true spirit and beauty of Venice. 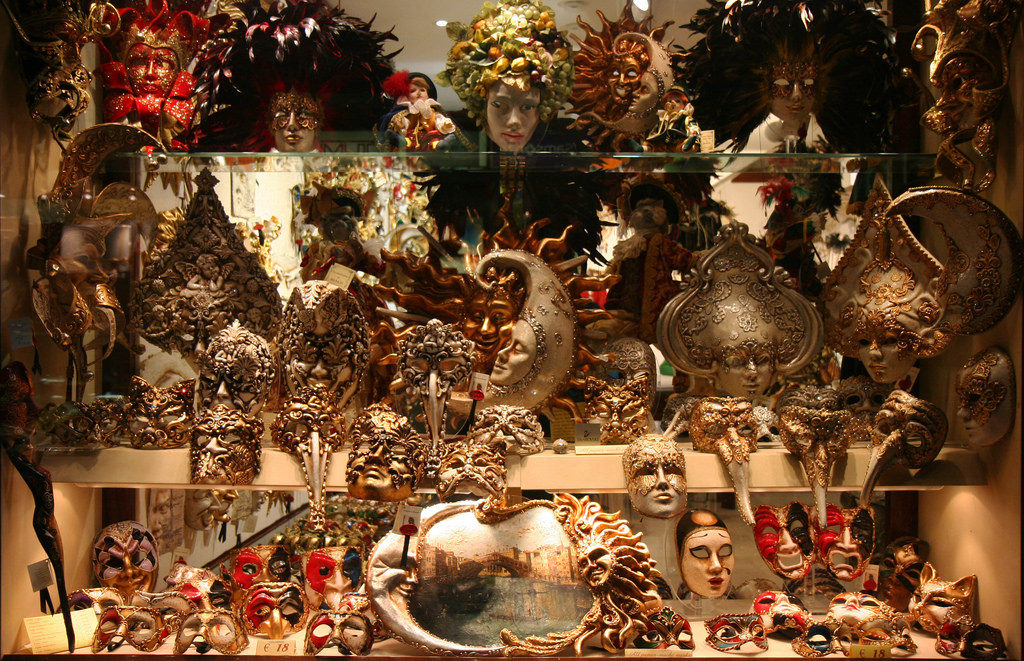 Carnivals are a longstanding tradition in many cities and towns throughout Italy, but Venetian Carnival is the most famous and revered of them all. For ten days each February or early March, Venice transforms into a heaven of revelry and partying, the extraordinary ‘Carnevale’. During this time millions of tourists descend upon the city, clamouring for a chance to experience lavish decadence of another era. The masks are seen everywhere – on the streets, in cafes, at parades, in gondolas, at the balls, and range from basic to extremely elaborate.

Venetian masks are often colorful, with intricate detail and rich decoration of beads, plumes, fabrics, or even small paintings. Authentic Venetian masks are made by hand from papier-mâché, designed in baroque style and often hail from Italian Commedia Del Arte, impersonating its various characters, such as Colombina, Arlecchino or Pulcinella.

When buying a mask in Venice, find the type of design that you like, then seek out a real Venetian mask atelier, where oftentimes the artisans will work in the back while the finished masks will be sold out front. These places are usually not found in big tourist spots, but mostly tucked away on white canals, back lanes, or small piazzas. Never fall for low prices and places with rows of similar cheap-looking masks. Those are most likely fakes made in China. The real Venetian masks are relatively heavy, perfectly crafted, and not cheap.

Where to Buy Venetian Masks?