Glass making can be one of the most complex and mesmerizing crafts in the world. Since ancient times, glass has always enthralled people with its intricate forms and beautiful translucent colors. To achieve this, glass masters have worked tirelessly to develop and improve various techniques that have been passed from one generation to the other throughout the years.

When thinking of Murano glass, it is highly unlikely that we think of sand, yet this rare material is at the base of all glass production. Glass is firstly a mix of siliceous sand, soda, lime and potassium, which is put to melt inside an oven at a temperature of around 2,700 Fahrenheit. After it has become flexible enough, it is removed with a pipe that will be used to blow the glass out while the glassmaker shapes and models it. The forms and colors given to each piece depend on the tools and chemicals used during its production. The techniques are also important; since they define the way minerals will react when they come in contact with glass and the chromatic effects they will leave on each piece. The first glass works with relevant artistic techniques can be dated back to the Roman period, in which raw materials such as sea shells, ashes and sand were used in its fabrication. Nowadays, the glass masters of the Mediterranean have refined and improved each technique, mixing it with delicate craftsmanship and impeccable Italian style. 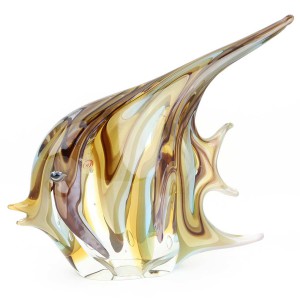 One of the most common techniques is “Sommerso”, which in Italian literally means “submerged”. This technique is used to create several layers of glass (usually with different contrasting colors) inside a single object, giving the illusion of “immersed” colors that lay on top of each other without mixing. This is done by uniting different layers of glass through heat and repeatedly immersing them in pots of molten colored glass. This technique is quite recognizable: it is characterized by an outer layer of colorless glass and thick layers of colored glass inside it, as if a big drop of color had been captured inside the transparent glass. When one first sees these objects, it seems almost impossible to conceive such beautiful colors being locked so perfectly inside what would seem solid glass, and then undoubtedly one begins to wonder how ever did they manage to achieve such a complex game of shapes and colors right in the middle of a clear glass object.

Antonio Da Ross, a highly skilled Venetian glassmaker, first developed the sommerso technique in Murano in the late 1930’s. His works suddenly became famous thanks to the effect of contrasting sunken colors inside one single piece, and were soon recognized by the Venice Biennale and many other museums across the world. Paolo Venini, another famous glassmaker, perfected the technique around the same time, but it was Seguso d’Arte who made it world famous during the 1950’s. Thanks to Flavio Poli (Seguso’s artistic director from 1937 to 1963), the Seguso house discovered many variations of this technique, which included the addition of gold leaf, minerals, or bubble glass, all of which gave his pieces an iridescent golden effect. Most of his pieces seem to be corroded by some kind of acid or mineral, yet the subtle difference of transparency and layers can still be seen thanks to the sommerso technique. The “Bullicante” glass, sometimes considered a different technique, can be considered as a variation of the sommerso technique. It consists of overlaying glass bubbles inside the main object, thus giving the illusion of small air bubbles trapped inside the artwork.

Antonio Da Ross did not leave the scene, he later came back during the late 1950’s to work for Ars Cenedese and continued refining his sommerso techniques. At this point, Da Ross took Cenedese to the Venice Biennale and presented “Contrappunti”, a series of glass objects characterized by colorful submerged layers that gained him the prize for the glass artworks category in 1960. From 1954 to 1962, designer Fulvio Bianconi entered Cenedese and had his works exhibited at the Venice Biennale in 1954. Cenedese also welcomed another artist experiencing with new sommerso techniques, Luigi Scarpa Croce, a Venetian painter who created a whimsical game of colors and thickness through glass layers.

All these artists offered influential contributions to this technique, obtaining the most bewildering effects of depth, intensity and relief. If glass is already a mesmerizing material, these ingenious techniques make it an even more fascinating object to the human eye. All of it thanks to the never-ending research and work of expert glass masters, who make of glass not only an adornment, but also a useful and valuable expression of the most creative minds.

If you enjoy Sommerso creations, you can see more of them in Murano’s Glass Museum or in Corning Museum Of Glass, or if you want one for your home check out GlassOfVenice.com, where we offer fine examples of contemporary Murano sommerso vases.