The glass production in Venice represents one of the most important and influencing factors of the city’s economy, and it is no secret that the best glass furnaces reside in Murano. When walking through the streets of Murano, it is almost impossible to name and enumerate all the intricate and complex techniques used in the production of these artworks. And if we were to enter a furnace and listen to the craftsmen talk, we would probably simply hear confusing words such as filigrana, retortoli, reticello, or spirale, without even knowing which technique is which. Every technique, tool, shape and type of glass has its name, quite distinct, and part of the glass masters’ vocabulary since almost a thousand years ago.

The most ancient piece of evidence documenting the existence of glass artworks dates back to the year 982, and thanks to this document, in 1982 the world celebrated a thousand years of Venetian glass artworks. Many other historic documents testify the work of furnaces along the Rio dei Vetrai river in Murano, where one can still find the finest and oldest furnaces in the city. In order to keep the industry’s secrets and glass masters from leaving, the Republic of Venice came up with several acknowledgements and distinctions to those who would create the finest and most creative of glass works. The Republic also protected some of the most important discoveries and innovations of those times, such as the “filigrana a retortoli” and “filigrana a reticello” that became famous around the sixteenth century.

“Filigrana” refers to the subtle filigree pattern created on glassware such as goblets and plates. When seeing the filigree works on glass, it is inevitable to wonder how anyone could achieve such a perfect and delicate balance of texture and transparency. To understand the filigree technique, it is necessary to first understand how glass canes are made. It all begins with a piece of molten glass that is divided into two rods, without braking or being separated. Thus, two craftsmen separate these rods, forming a long thin string of glass, balancing in the middle. Once it is thin and long enough, they let it down on the floor on top of some wood boards, and it is left to cool down. This procedure is done repetitively until enough glass canes are gathered and are ready to be cut. Once they’re cool, these canes can be cut into different lengths and be used in multiple techniques such as lampworking, the “murrine” or “filigrana”.

When it comes to filigrana, it is important to note that these thin glass canes are almost always of a matte white color, while the glass core they will be melted into later is always colorful. Once the canes have been cut to the desired length, they are arranged on a metal plate and heated so they are lightly glued to one another. After this, a colorful glass core (usually a cylindrical piece) is rolled over the canes, making them stick around it. Once the canes are adhered to the core, the whole piece is put inside the oven and heated so that the craftsman can model it. The whole melting process causes the canes to dissolve and form one piece, leaving the core of white matte glass untouched. While the glass master is working on the piece, these lines become thinner and thinner through stretching and tweaking. The result is a delicate and hypnotizing game of lines and waves, gracefully going from one end to the other, creating optical illusions along the way.

This filigree or filigrana technique has been used since the 1500’s, and the great glass master Archimede Seguso was famous for making an extensive research and experimentation during the 1950’s. These studies allowed Seguso to create some of its most impressive collections, such as the “filigrana stellata”, the “merletto” and the “spiraline”.

The filigree technique has some variations. One of the most famous ones is the “reticello”. In Italian, this literally means “a small net”, and this is precisely the effect one sees when looking at this technique. This variation requires extreme patience and mastery. Just as the classic filigree technique, the reticello follows the same steps, only with two glass cores wrapped inside the glass canes. The visual “network” is created when one rod is turned clockwise and the other counter clockwise. These movements cause little air bubbles to get trapped inside the crisscross pattern, giving it an even more mesmerizing appearance. These geometric patterns were very much in vogue during the 1920’s, when Giacomo Cappellin began experimenting with rather large glass pieces with contrasting shapes. 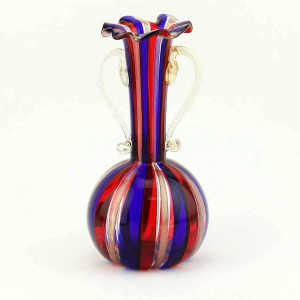 Another variation of the filigree technique is the “zanfirico”, also called “retortoli”. The name “zanfirico” comes from the Venetian dealer Antonio Sanquirico, who came up with this technique during the nineteenth century. If speaking of “retortoli”, the term refers to the “spirals” and “twists” given to the glass canes that will be part of the final piece. This technique changes the process at the very beginning, with the production of the glass canes: instead of just elongating the glass thread between two rods, each rod is twisted in an opposite direction, thus causing the “spiral” effect on the cane. After the twisted canes have cooled down, the procedure is the same as the classic filigree technique. The elegant vases from Fulvio Bianconi created during the mid 1900’s and Toso’s creations designed by Dino Martens are among the most classic and astonishing pieces of filigrana a retortoli.

Nowadays we find ambitious glass masters who have improved and even elaborated on more complex forms of filigrana. Their designs become even more exquisite and daring, while others prefer to continue with the history of more classic styles. All of these techniques and designs, however, have been worked on and developed by great glass masters throughout the years. After more than a thousand years of history, it is no wonder that Venice keeps leading the way in the glass making industry.

If you like the look of Filigrana glass, you may see more of Filigrana, Zanfirico, Reticello, and other variations of glass cane interlacing in Murano’s Glass Museum or in Corning Museum Of Glass. And if you’d like to admire Filigrana at home every day, you can get a beautiful piece at GlassOfVenice.com, where we offer fine examples of Murano filigrana vases and sculptures .