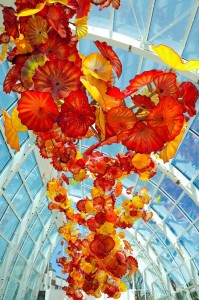 Murano Island in Venice is world-renown for amazing art glass that has evolved from its humble utilitarian beginnings into an art form over the centuries. Part of the reason is the sheer concentration of glass furnaces on the island and the length of time that the artisans have been experimenting and creating, leading to virtuosity in techniques and styles. One of the most famous and oldest glassworks on Murano is Venini, the family that has given the world generations of talented Murano Glass artists. The surprising part, however, is that in the twentieth century Venini glassworks helped create a new breed of masterful and innovative artists, those that were born outside of Murano and even Italy.

In breaking with Murano’s long-standing tradition of shielding the glassmakers’ world from the outsiders, Venini started serving as a learning site for American artists eager to learn the secrets of Murano Glass masters. Over the years, the Venini glass factories have hosted American-born talents such as Thomas Stearns, Dale Chihuly, and Richard Marquis, all of whom ultimately helped expand Murano’s fame far beyond Italy. These prominent artists have traveled to Murano on the prestigious Fulbright Scholarship and were fascinated by the medium of glass and the artistic possibilities it offered.. However, although they share a country of origin and a common passion which expanded the boundaries of glass work, they are as different and unique as the handmade glass pieces they produce.

Talented in so many spheres crossing literature, science, and art, Thomas Stearns was fascinated by the dance between light and glass and, during his time as a student at Cranbrook Academy, had developed ideas about how images could provoke profound emotional responses and elicit intellectual engagement in its viewers. Upon his arrival in Venice in 1959, Stearns didn’t know a single word in the Italian language, but was able to produce such transcendent and poignant designs that he was selected by Paolo Venini himself to work with glass blowers in executing his designs. Stearns’ designs were not very well received on Murano initially as many of them broke with the traditional perception of glass art, yet Venini family had the vision for the future of art glass and was able to recognize Stearns’ talent and contribution to evolution of the art.

Today Stearns is most famous for his Spiralato design, which he produced for Venini in 1961. This design features a tall, cylindrical glass vessel with spirals, made with the incalmo technique. Another famous piece titled La Sentinella di Venezia, made in 1962, a piece inspired by lighthouse form, is a symbolical warning that reflected the anxiety Stearns felt about the overwhelming pollution in Venice. While Stearns has not created many pieces in his relatively short career in Venice, his contribution to Murano Glass is indisputable and his art is highly sought after, commanding very high price tags at auction houses worldwide.

Approximately a decade after Stearns came to Venice, Dale Chihuly would walk in his footsteps. Born in Tacoma, Washington, Chihuly had an artistic predisposition from adolescence. He pursued his penchant for the visual arts by enrolling in the University of Washington in Seattle to study interior design and architecture. After briefly flirting with the basics of glass work, Chihuly traveled the world for inspiration. His travels took him to Italy, Jordan, and parts of the Middle East, where he spent his time viewing art and immersing himself in the local cultures. He returned to the United States with a wealth of distinct perspectives which, like any true artist, he incorporated into his work. In fact, his pieces, which integrated glass and textiles, were so innovative that they earned him the Seattle Weavers Guild Award in 1964. The following year Chihuly blew his first glass piece and was so captured by the precision and mastery necessary to work with glass that he enrolled in the first glass program in the United States, offered by the University of Wisconsin, where he received an M.S. in Sculpture; he subsequently earned an M.F.A. from the Rhode Island School of Design. However, it was the invitation by architect Ludovico Diaz de Santillana, the son-in-law of Paolo Venini, which forever changed his relationship with glass. In Murano, Chihuly worked day in and day out with veteran glass blowers who, in a rare gesture of trust, let him in on the secrets taught to them by their fathers.

His embrace of the concept of glass as legacy is partly evident in his development of the Pilchuck Glass School, started in Seattle, dedicated exclusively to advancing the knowledge and technique of artists who work in glass. His collections, such as Seaforms, Ichiban, and Baskets all reveal his fascination with expanding glass to its limits and creating glass art which closely mimics nature and reality. His later series, The Venetians, takes inspiration from Venetian glass art, although it is still an American interpretation, evident in its contemporary, fantastical touches. The pieces in his most prominent series, Chandeliers, continue to leave viewers speechless with their colorful magnificence, imposing stature, and intricate construction.

The Venini factories had left such an impact on Chihuly that he advised his younger colleague, Richard Marquis, to apply for the Fulbright Scholarship to Italy. Marquis’ style can be described as ironic, eclectic, contradictory, and humorous, yet at the same soft, sincere, and graceful. Marquis began his studies in architecture at the University of Berkeley in 1963, complementing his visual arts studies with courses in ceramics, but after a fateful encounter with then recently hired professor Marvin Lipofsky, who was glass blowing one afternoon, Marquis adopted a new artistic mentality for his future.

In the 1960s the glass industry was still young in the United States, and the scarcity of glass knowledge sent Marquis looking for masters, and inevitably to the island of Murano. There he learned intricate glass-making techniques such as Incalmo, and Murrine (aka Millefiori). He used Millefiori in his master thesis at Berkeley in 1970, where he created a murrine cane of the Lord’s Prayer. He continued to use these techniques into the next decade, integrating them into collections that featured teapots, vases, and landscape pieces. His most recent work makes use a new form called “slab construction,” a method already employed in ceramics. The best example of this is his famous work, “Dust Pan,” created near his home on Whidbey Island, Washington in 2004.

Stearns, Chihuly, and Marquis represent the thriving interaction between American artists and Venetian glass masters. For the last few decades, the glass blowers of Murano have been gracious enough to share their secrets with foreign artists, who have repaid this gift by bringing the world inventive, exquisite, and thought provoking glass art. This infusion of new life into the world of glass has produced the reemergence of interest and appreciation for handmade glass products, a specialty in which Murano takes great cultural and historical pride. To help the world appreciate the best of Murano Glass, we established GlassOfVenice – the company whose mission is to share the artistic and historical heritage of Murano Glass with the world. GlassOfVenice allows fans and collectors alike to purchase top-quality authentic Murano Glass pieces online using top quality images and detailed descriptions, and have them delivered to any destination worldwide.