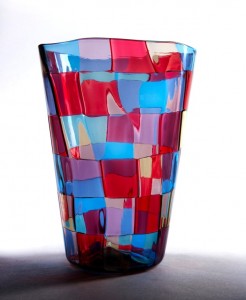 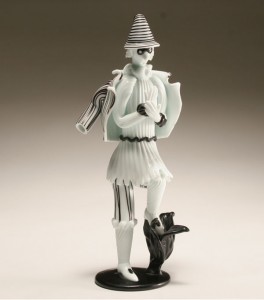 If you find yourself viewing masterful glass works and feel the urge to smile, then odds are you are in the presence of a Fulvio Bianconi design. Famous for producing glass art that celebrates individuality, sensuality, and the light-hearted side of life, Bianconi pieces are still very popular today due to their lively colors, dynamic shapes, and the enduring popularity of his pezzato style.

An artistic prodigy, Bianconi began apprenticing at Murano Glass furnaces as young as sixteen. He later used his amusing style and undeniable talent to consult on and produce cartoons for the Italian Ministry of Popular Culture, until the end of World War II. However, it wasn’t long before the island of Murano and the glass furnaces of his youth called on him, and in 1947 the prominent Murano Glass master Paolo Venini hired him as a designer for a series of perfume glass bottles. The financial independence granted to him by his work as a graphic designer  allowed him to dedicate an ample amount of time to freelance work for Venini, which yielded works characteristic of his free spirited and playful style. This did not sit well with the glass artisans at Murano initially. The trademark of a gifted glass artisan in Murano at the time was the ability to perfectly recreate a style or design, and their celebration of flawless repetition could not have been farther from Bianconi’s perception of what constituted mastery, beauty and technique. Bianconi is credited as saying, “…the artistic glass has to be unique, if it is repeated it loses its charm…” 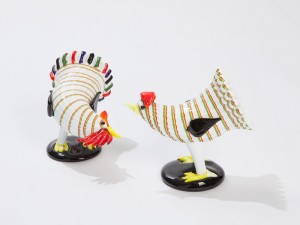 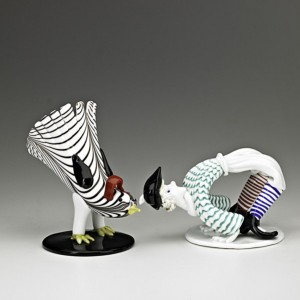 His pieces, which take inspiration from the female form, caricature, and the acceptance, even praise, of imperfection in line and color, opened a new path for Murano Glass art in the 1940s and 50’s. After the grim years of the war the playfulness and color play of his designs struck the note with both Murano glass collectors and general public alike, making Bianconi’s pieces highly sought after and praised the world over. Fulvio Bianconi was the first of Murano masters to represent the human figure in glass form, often accompanied by a touch of caricature, much to the amusement of viewers who were used to only seeing this style in illustration. Some of his more notable works include the Bikini vase, the Venini Le Mascheri glass figure, and his series of blown glass vases created in original Pezzato style, such as the Fulvio Bianconi Pezzato Arlecchino vase, designed circa 1950. In fact, Pezzato style with its uneven shapes and patches of rich colors was a great way to introduce a breath of modernity into Murano art that had been until then very conservative and notoriously rooted in ancient traditions. In addition to being a glass artist, Fulvio Bianconi was also a prolific painter and cartoonist, and is considered by many today as one of the key Murano Glass masters who were instrumental in laying the foundation of contemporary Murano Glass Art.