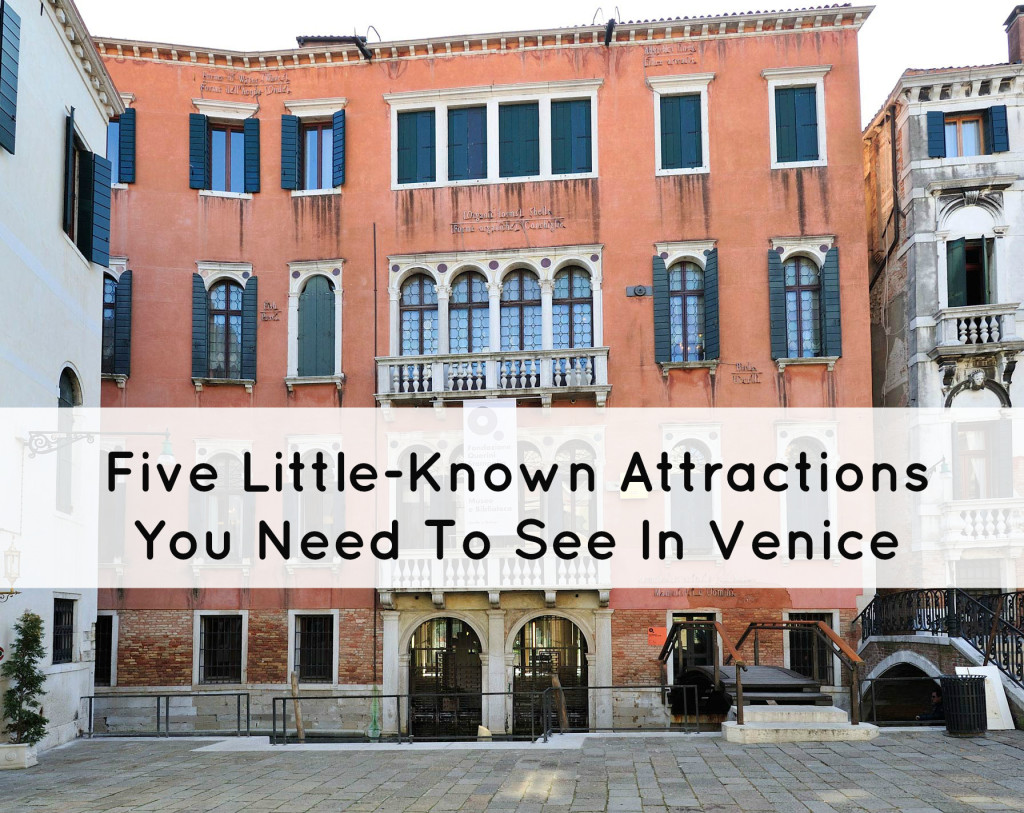 When it comes to organizing a trip to Venice, the itineraries are full of famous attractions that appear on every travel advice website and every must-see list you will ever come across. Among those are The Doge’s Palace, and Basilica San Marco, Accademia Gallery and Ca’ Rezzonico, The Campanile, and The Astronomical Clock. Hunting for those top attractions, you will stand in lines for hours and run into crowds of tourists who are all hungry to see the same things you came to see. This may leave you aggravated, distressed, and wondering what you may have done better to have more authentic Venetian experience. You need not worry – we will let you in on the hidden secrets, the activities that many miss, the attractions that are still relatively quiet, not overrun with tourists, and promise a wonderfully authentic experience.

Get to know one of the few remaining gondola yards in Venice. Just a few steps down the canal near the Accademia Bridge, one can find Venice’s only remaining original gondola-building and maintenance yard, the Squero San Trovaso workshop. Nowadays it works mainly as a maintenance and repair point, but during the 1600’s it was Venice’s busiest production point for the ten thousand gondolas that once traveled along its canals and into the Lagoon. The squero is not open to the public but if you visit during the working hours you can see the work from the outside, and it is a fascinating experience. Each gondola is made out of eight different types of wood, exactly as it was hundreds of years ago, and includes lots of exclusively carved elements. Because gondolas are still crafted in a traditional way, it takes over a month to build one, and it usually can be in service for about 15 years, after which it must be refinished and can last another ten years. There are woodcarving workshops that create various wooden parts for gondolas and are very interesting to visit to see this ancient craft in action. The workshop of Paolo Brandolisio a few steps behind Piazza San Marco is a great one to visit. There are several guided tours for visitors, like the two-hour Oltrex tour starting from Riva degli Schiavoni, or the one day experience Venice for Children, that encompasses a whole seminar on gondola making and a tour on vaporetto through the Arsenale and the Naval Museum. After getting to know this craft better, one will never see a gondola the same way again, for they are unique custom made vessels with centuries of history and craftsmanship, and no one is identical to another. 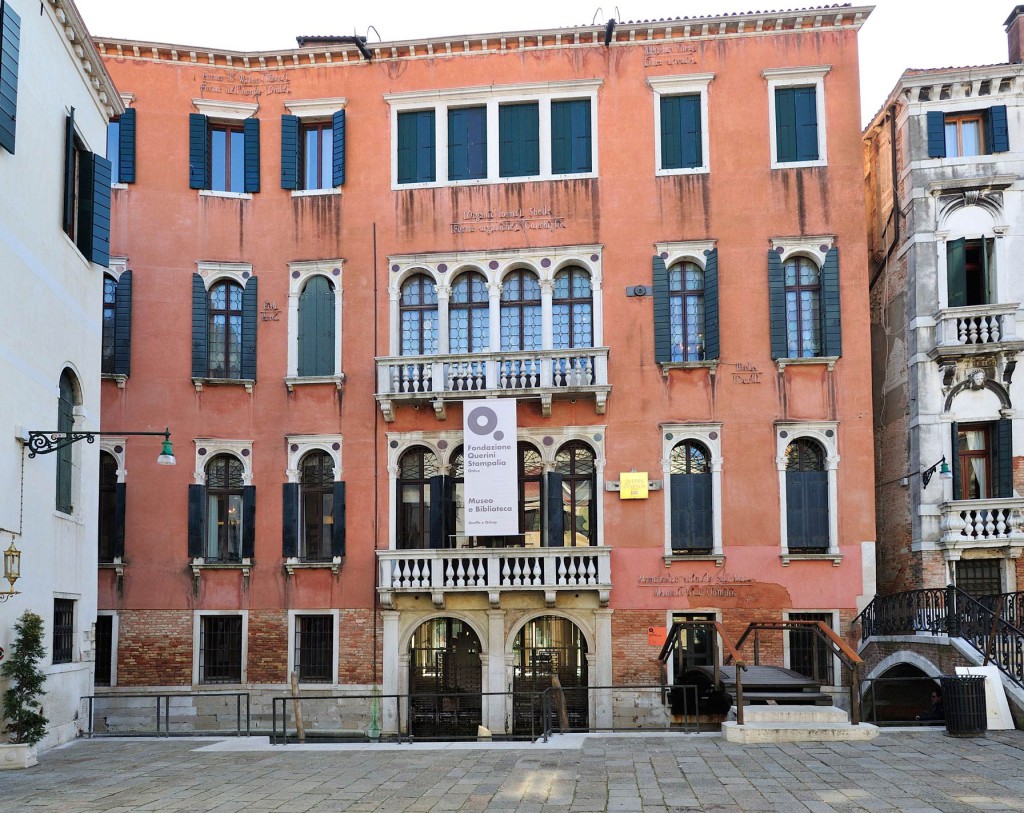 Tucked away in a pretty corner of sestiere Castello is another one of Venice’s hidden jewels, the Querini Stampalia Museum. Born out of the desire to continue and share the knowledge of artistic studies, the Fondazione Querini Stampalia was created in 1869 according to the will of Count Giovanni Querini Stampalia. Having died with no heirs, Querini Stampalia, a prominent member of Venetian nobility, left all his belongings, including a gorgeous Palazzo and amazing library, to the City Of Venice, with the intent of creating a museum open to the public.  That same year the Palazzo was converted to a beautiful museum, where all of Querini-Stampalia’s original interiors, furnishings, and artworks gathered by him and generations of his predecessors, are carefully preserved.  The museum is one of the best house-museums in Europe, offering a peek into the life of Venetian nobility in the eighteenth century, from elaborate salons to elegant bedrooms, complete with frescoes, paintings, and gorgeous decor, including Murano Glass. Venice lovers and history buffs will be blown away by the museum’s unique collection of paintings that depict, in precise detail, the many Venetian celebrations, public events, holidays and historical moments as seen in the eighteenth century. The almost photographic nature of these paintings, along with excellent descriptions available in several languages, allow us to vividly imagine how Venetians lived, what they looked like, how they entertained themselves, and what they cared about centuries ago. Another feature of this museum is its unique library that contains over 350,000 books, and remains open late in the evening and even during holidays, following its founder’s will. Inside Querini-Stampalia living quarters the different artworks on display include paintings by Giovanni Bellini, Pietro Longhi, and Giandomenico Tiepolo, among others, antique Venetian furniture, sculptures, Murano glass chandeliers, mirrors, and decorative glassware, French porcelain, tapestries, and other historic pieces dating all the way back to the XIV century.


3. Explore One Of Venice’s Newer Museums 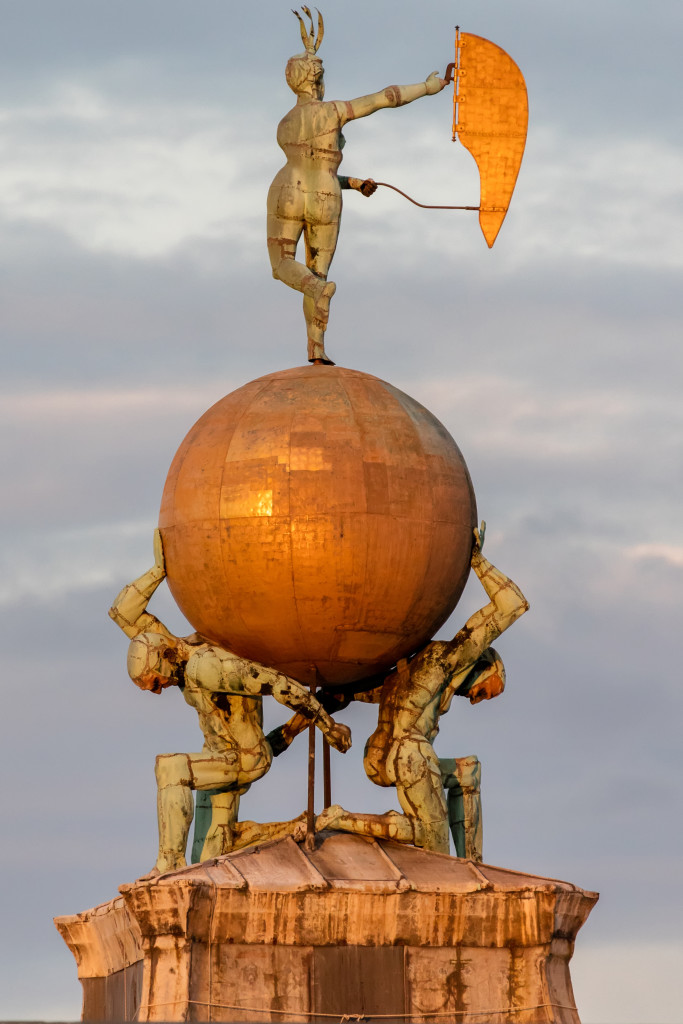 Punta della Dogana is the site of Venice’s historical naval customs house, or Dogana da Mar. The long Customs building we see today graced with a beautiful sculpture of Atlas holding up the globe, symbolizing the supremacy of Venice, dates from 1682. The Customs house continued to be in operation until 1980’s, becoming a link connecting Venice’s past with its present. After the building stopped being used for this purpose, it was abandoned and had been dilapidated by neglect. Finally, the city of Venice decided to put this building back into use and awarded the tender for renovating the space to François Pinault (French billionaire businessman and avid art collector). In the new hands, this building underwent a glorious restoration by architect Tadao Ando in 2008. The amazing architecture is enough for one to spend a whole morning admiring the place. It has been described as having an “industrial and minimalist soul”, thanks to its polished concrete floors, steel anchors and exposed brick walls. The museum hosts temporary art exhibitions and presents works from Pinault’s own extensive collection. 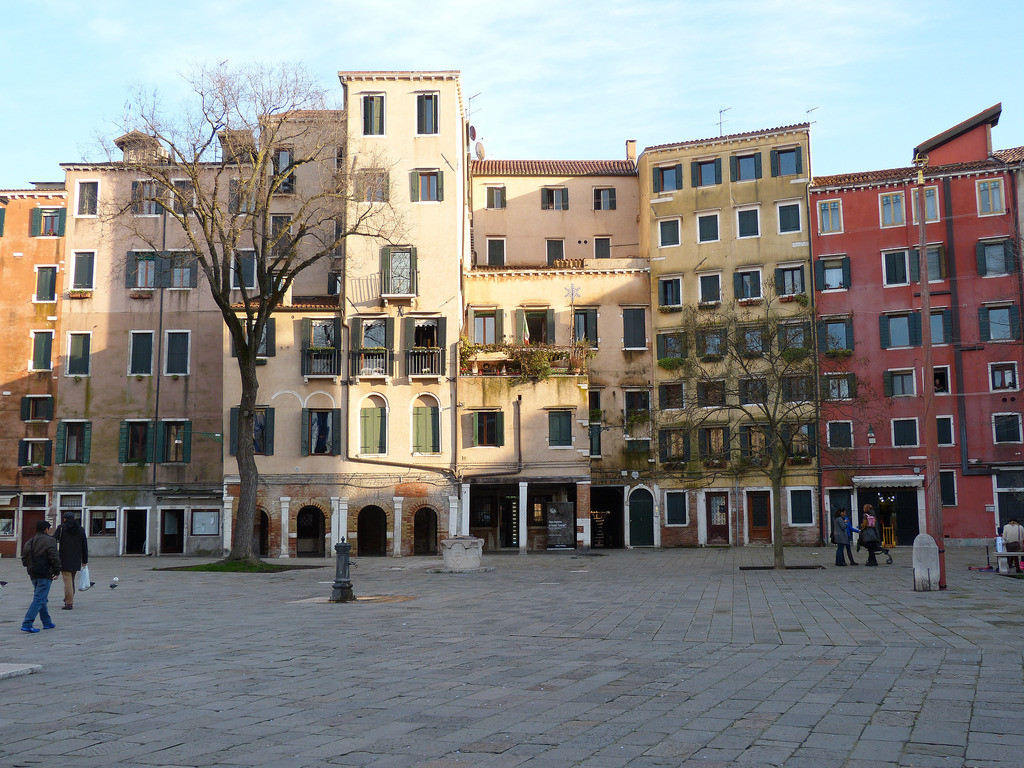 If one prefers to spend the day strolling along some not-so-crowded streets while learning little-known Venetian history, the Venetian Jewish Ghetto is just the area to visit. Located in the Cannaregio district, this Venetian ghetto is actually the first Jewish ghetto in all of Europe, instituted in March of 1516. Jews were present in Venice as far back as the tenth century though they were not allowed to settle there. Later in 1290, Jewish merchants and moneylenders received permission to work in Venice conditioned upon paying a special 5% tax on their import and export transactions. Finally, forced by the needs for financing brought on by the city’s flourishing commerce, Venice’s government allowed Jewish moneylenders to settle in the city in 1385 and even gave them land to be used as a cemetery. However, attitudes towards Jews were becoming progressively worse over the following two centuries, as the growing prosperity of Jewish residents stoked fears of their influence on Venice’s Christian society. Hence after much deliberation in 1516 Venice’s ruling council decided to confine Jews to a small part of Venice called Ghetto, named after the foundries (getti) that were once located in the area. The most densely populated area of Venice in the centuries past, Ghetto was set up on an island, which provided a natural way to close it up at night and segregate its inhabitants from the rest of Venice. Ghetto features Venice’s tallest buildings where Jewish residents were forced to dwell as their numbers swelled since they were prohibited from settling beyond the confines of this small island. The Ghetto area historically had been divided into two different sections: the New Ghetto, and the Old Ghetto, the former was inhabited by the Ashkenazi Jews from Germany and Italy, while the latter was the settlement of the Sephardic Jews from the Levant. This division can turn out to be rather confusing since in the historical sense the New Ghetto is actually older than the “old” one.

Despite the horrendous devastation of Jewish life in Venice brought on by Holocaust, this part of Venice is still the center of Jewish life, although out of only 500 Jewish residents of Venice just 30 still live in the Ghetto. The area offers a peek into the rich history of Jews in Venice, the vibrant society that once sparked the interest of William Shakespeare, who described some of the local Judeo-Christian tensions in his “Merchant Of Venice”. The Ghetto is also a place to enjoy traditional cuisine in a few good kosher-certified restaurants, as well as browse Judaic shops and check out historic synagogues. 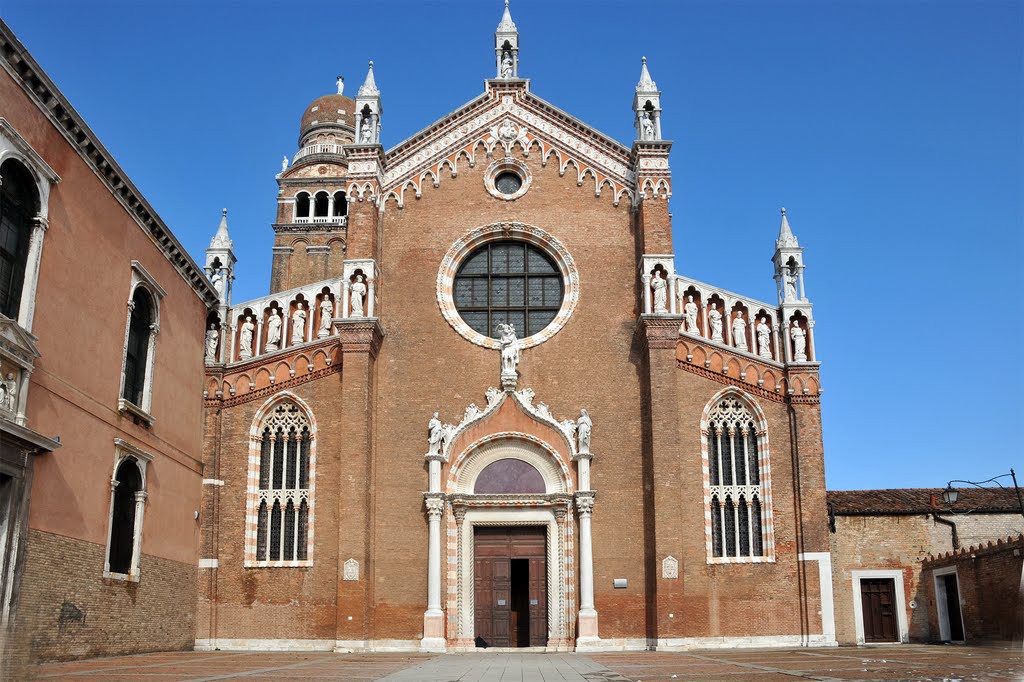 Switching the subject to Venice’s Christian history, in the same Cannaregio district we can also find little-known but very old Madonna dell’Orto Church, a beautiful brickwork construction build in the XIV century. Constructed under the direction of Tiberio da Parma (who is buried inside the church), it was built by the now-defunct religious order of the “Humiliati” and initially dedicated to Saint Christopher, patron saint of travelers. Its name would later change, dedicating the church to the Holy Virgin, thanks to a famous statue of a Madonna that was discovered in an orchard (orto) near the church. Its façade shows impressive brickwork walls, while the inside includes a nave and two isles framed with Greek marble columns. The paintings found inside are invaluable: there are a number paintings by renowned Venetian artist Tintoretto, and some works by Bellini and Titian. Tintoretto, who was born in Venice in 1518, had a long and very productive career as a painter in Venice, having executed many paintings and large-scale frescoes in Palazzo Del Doge, numerous churches, and Scuolas. Paintings “Worship of the Golden Calf” and the “Last Judgment” in Madonna Dell’Orto are the ones that brought Tintoretto initial acclaim, setting him on the path to fame and prosperity. While working on his commissions for this church, Tintoretto lived in a small Gothic house next to the church looking out to Fondamenta de Mori, which still stands today. Tintoretto died in 1594 and is buried in Madonna dell’Orto church, next to his beloved daughter Marietta who died four years before him at the age of thirty. The terracotta bust on Tintoretto’s tomb is the work of famous Murano Glass artist and sculptor, Napoleone Martinuzzi, created in 1937.

Venice is a city full of secrets that will surely marvel tourists. There is nothing as charming as walking along Venice’s back alleys and allowing oneself to get lost in the history of the city. It is not only the museums that can offer this but its palaces, its restaurants, its canals, its churches and its people. Venice is a city to be enjoyed in countless ways, we only need to learn where to look.

One thought on “Five Attractions In Venice Without The Crowds”