Acqua Alta (high water) is a term used in Venice for the high tide in the Adriatic Sea. The water levels reach the air maximum in the Venetian Lagoon, which in turn causes flooding in Venice. This usually happens outside of the Venetian tourist season, between September and April when the tides are strengthened by seasonal winds called Sirocco and Bora that blow along the Adriatic coast.

Venetian Lagoon is a large elongated body of water around 35 miles long and 6 miles wide, which is separated from Adriatic Sea by a sand bar cut by three passages: Lido, Malamocco, and Chioggia. During high tides the water from the sea comes into the Lagoon via these three passages, raising the Lagoon level, and afterwards it goes back out to the sea. These daily tides clean up Venetian canals allowing the water to circulate, and the city to survive without special sewer systems. 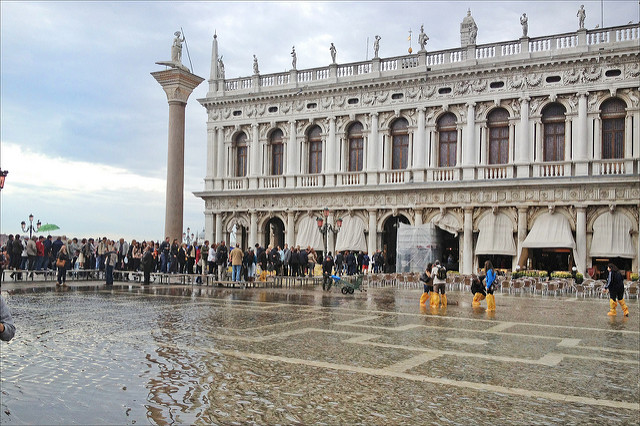 There is a special scale of acqua alta levels developed just for measuring tides in Venice. At Punta della Dogana, Venice’s entrance to the Lagoon there is a hydrographic station, which regularly takes measurements. The zero point was defined in 1897 when measurements started. Add 31 to 43 inches to that and you get Venetian high tide. 44 to 55 inches above 0 is very high tide. And above 5 inches is extremely high tide.

The worst acqua alta was recorded in November of 1966, with an increase of 76 inches, and was devastating for the city and its inhabitants. While it was a relatively infrequent phenomenon in the nineteenth century, with about 10 instances a year, the frequency and severity of it increased last century to reach about 60 times a year. Some people think that is because Venice is quickly sinking, but this is not accurate. The pilings on which Venice stands sunk 10cm lower in the twentieth century due to the rise of industrial activity in the Lagoon and pumping out of the groundwater, which caused rapid compression of the layers of land on the bottom of the Lagoon, which holds the pilings. Once the government realized how this was affecting the city, groundwater pumping was stopped and now Venice sinks by less than a millimeter a year mostly due to natural geological reasons.

However, a bigger problem for the city is rising ocean levels due to climate change, and it is expected that increased speed of arctic ice melting will bring even more frequent and severe floods. Much scientific, environmental, and architectural thought went into trying to protect the city from this ongoing threat, resulting in much debate and finally in approval of a large scale very ambitious construction project dubbed MOSE (Modulo Sperimentale Elettromeccanico or Experimental Electromechanical Module). The design involves 57 retractable floodgates that will be installed at the entrances from the Adriatic Sea into each of the three Lagoon inlets, which would rise once the water levels entering the Lagoon will reach dangerous levels and stop more water from coming in. Began back in 2003, the project has encountered multiple delays and budget issues, and is currently expected to be completed by June 2018. 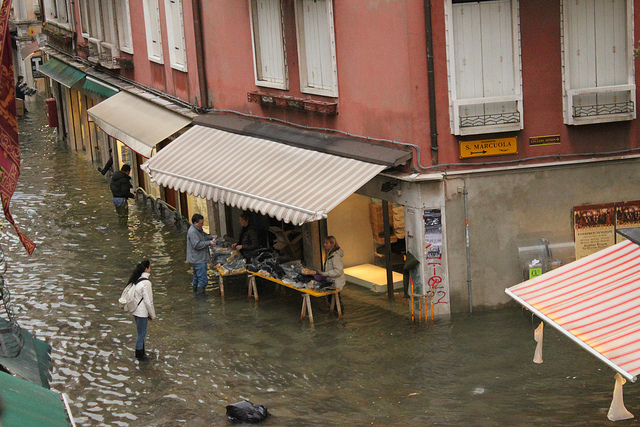 The optimists hope that this will mark the end of infamous Venetian floods and the phenomenon of acqua alta and will ultimately prevent the destruction of Venice brought on by frequent inflows of saltwater. The pessimists worry that with the rising sea levels there is a good chance that the floodgates will stay closed for long stretches of time turning Venetian Lagoon into a marshy lake and creating dangerous pollution levels and a potential sanitation hazard in the Lagoon and the city.

Today when acqua alta hits, some lower lying areas of Venice, including its lowest point, piazza San Marco, end up under water and passage through the city becomes difficult. The city combats the issue by installing raised walkways in the most vulnerable areas, but mobility is limited limited to only a few routes. For Venetians life goes on even during most floods, and every Venetian owns a pair of special very tall rain boots, but tourists often opt for a lighter version to brave the watered streets. Produced by company called Goldon, they look like yellow plastic covers which are worn above regular shoes and are light, easy to carry, and surprisingly effective at keeping feet dry and letting you explore the city during acqua alta. 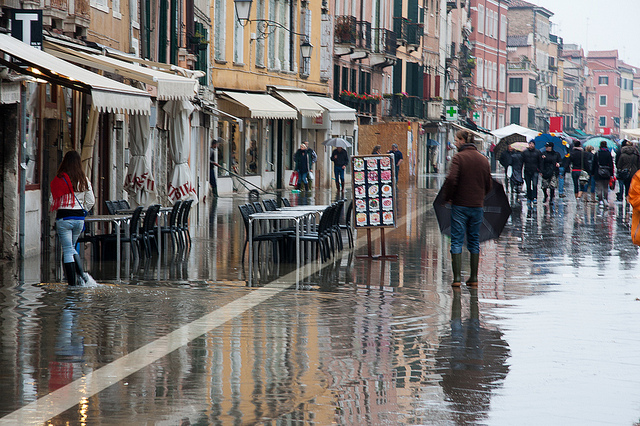 If you happen to experience acqua alta in Venice, take it in stride. Buy the plastic boot covers or rain boots and continue to enjoy the city’s special ambiance and this unique experience that you will not soon forget.