Venice is a small yet mighty island, detached from mainland Italy, and widely regarded by Italians as an entity of its own. Venetians have their own dialect, their own traditions and their own unique recipes that differ significantly from other regions in Northern Italy.

The main difference between Venetian cuisine and foods from other Italian regions is ingredients. As Venice is an island, with a history of isolation and conflict, the city was often deprived of certain ingredients that mainland Italy had easy access to. For this reason, Venice began their traditions by perusing local ingredients, readily available to humble families. These included fish, seafood, rice, and vegetables.

However, as Venice grew increasingly more wealthy, the city began to incorporate more luxurious ingredients into their recipes. Suddenly, humble and meager meals began to feature exotic ingredients. Venice began to import foods from other regions of the country, as well as other countries entirely, as part of a concerted effort to display their wealth in all available outlets, including through their food. As a result, Venetian cuisine is now regarded as a set of recipes unique to the region, that feature wonderful combinations of flavors and textures.

Influences from the Sea 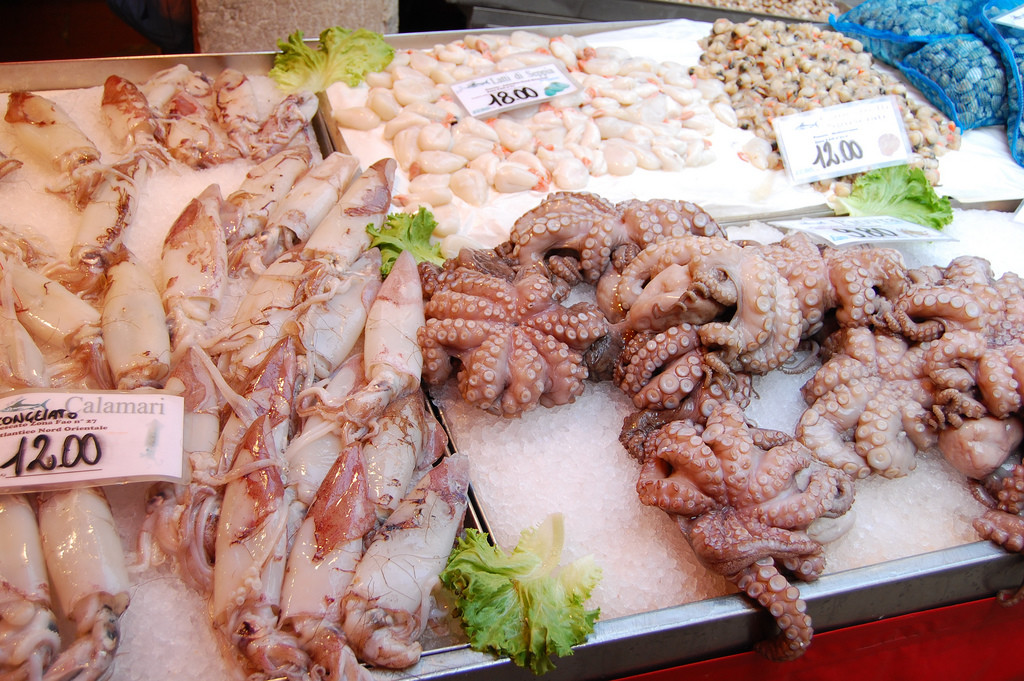 The most distinctive feature of Venetian cuisine is of course the prominence of seafood and fish, which is not surprising given Venice’s unique connection to the sea. Lots of local fish and seafood from the Venetian Lagoon comes straight from the fisherman stalls of the Rialto seafood market into the local dishes in various forms, from raw to salt-cured, fried and baked. One of the most notable foods hailing from Venice is Baccala. Baccala is a name used to refer to dried and salted cod fish, that can be eaten alone, or as part of a larger dish. Most Venetians tend to season the cured fish with garlic and parsley or puree it into a creamy spread (the latter recipe is known as “Baccala Mantecato” and is very popular in Venice). Regardless of the form it’s presented in, the widespread use of salt-cured fish is a distinct Venetian tradition, very different from the rest of Italy. Just a few miles down the road, for example, is the port city of Trieste. This is a large and historic city, that played a dominant role in the rise of the Austrian empire. In Trieste, baccala is less prominent, and cod fish is more commonly fried or used in pasta. Throughout Italy, in fact, fish is used abundantly in stews; in pasta and as a fried main course. The fact that Venice uses salt cod as a condiment, or as a standalone meal, is very distinctive- and also very unique to the region.

The Importance Of Rice 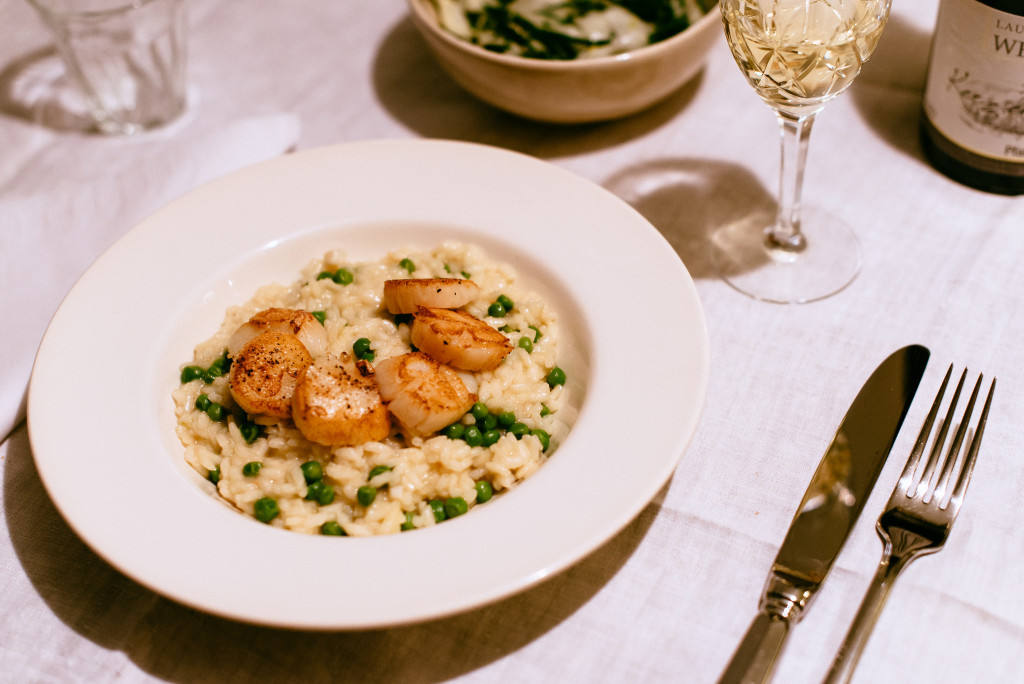 Thanks to the growing amount of trade in earlier centuries, Venetians were able to gain access to unusual and rare ingredients at the time. In the past, one of these ingredients available in near surplus was rice. For this reason, rice plays an important role in Venetian cuisine, which is significantly different from most other regions in Italy- where pasta and bread are considered key carbohydrates in the diet.

It can be tempting to compare the abundance of rice in Venetian cuisine to the importance of rice in East Asian cultures, and observers would be right in noting this similarity between the two. As previously stated, Venice and Trieste were notable port cities. Venice was therefore the recipient of goods from the Orient, and residents of the city were exposed to a variety of customs and traditions from Arabic and Asian countries. This certainly played an influence on the cuisine, although in Venetian cooking, the rice is served in a dish called “risotto” alongside some typical Italian ingredients- which helps create a semblance of unity between Venice and the rest of the country.

In Venetian cuisine, there are more than forty key recipes that feature rice. However, one of the most popular varieties is called “Risi e figadini”, which is Venetian dialect for ‘Rice and livers’. This is a dish that consists of filleted chicken livers, alongside a variety of seasonings and other ingredients. 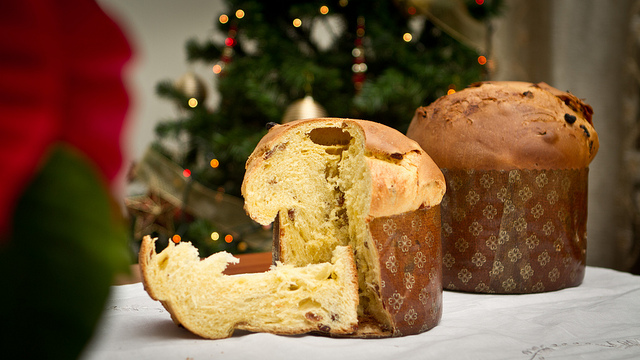 Italy as a country values its rituals and traditions, but Venice is particularly adamant on celebrating various events throughout the year, and doing so with food. For this reason, Venetian cooking is very seasonal, and the availability of certain dishes is dependent on the time of the year. This differs from the rest of Italy, where although cuisine depends on seasonal ingredients to some extent, it also relies on the convenience of familiarity and repetition.

In Venice, seasonal foods are a fact of life. Often the foods are tied to religious events. Around Easter, there are certain baked goods and cakes that are served exclusively to commemorate the religious celebration, but this extends to savory foods too. There are traditions in Venice for serving certain foods on certain days of the week, and even certain mealtimes, especially around Christmas. On Christmas Eve the venetian tradition is to eat Risotto de Pevarasse (Venetian Clams risotto), Branzino al forno (Seabass baked in the oven) or Anguilla (Eel) along with a dish of mixed fried fish, and vegetables that are typically grilled. On Christmas Day a family would sit down for a large meal that would start with an antipasto of local cured sausage made from parts of pig’s neck called ossocollo, and other local cold cuts like Prosciutto, Soppressa, and Salame. After the main course featuring capon or boiled salame, the locals eat desert ranging from dried or candied fruits and nuts to a delicious delicacy from a local bakery, such as Pandoro (a soft cake from Verona) or Panettone (similar to Pandoro but also with raisins and orange peel).

Even outside of the holidays, seasonal considerations prevail. The Venetians use a lot of vegetables from the surrounding farmlands in their dishes, which adds additional variability to their cuisine. The first peas show up in April, along with asparagus and artichokes, which are abundant in Veneto region. Starting from late Summer and into the Fall Venetians add wild mushrooms and chestnuts to various dishes, creating a cascade of flavors and upping the ante on deliciousness. As weather gets colder the locals and tourists start spending more time inside and the restaurants vie for their attention. But the abundance of vegetables in Venice doesn’t end with winter, and squash, pumpkin, cabbage and potatoes, are prominently featured in savory winter dishes. 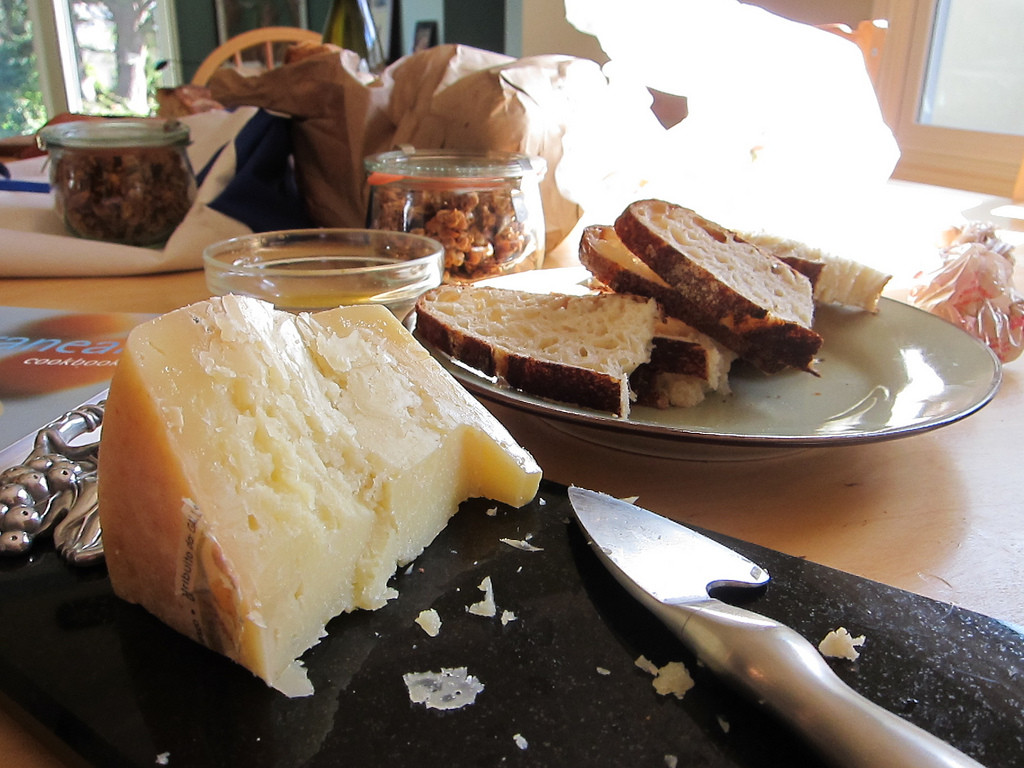 Venice is home to many artisans and regional Italians who value their gastronomic traditions. For this reason, for hundreds of years, Venice has created and curated some of Italy’s most delicious foods specific to this region of the country. Certain products are completely different from the rest of Italy, and this includes cheeses, hams and varieties of pasta.

One Venetian product unique to the region is ‘Bigoli’ pasta. This is a thick, spaghetti shaped pasta, originally made from buckwheat and traditionally produced using duck eggs. The presence of the unusual wheat and eggs is what sets the pasta apart from other regions of the country, where chicken eggs and wheat flour are more commonly used. Bigly pasta features in many traditional recipes, and is usually difficult to source outside of Venice.

Similarly, ‘Pecorino Veneto’ is a type of cheese made from sheep’s milk, that is unique to this region of the country. It’s relatively sweet for sheep’s cheese, and is particularly difficult to find outside of the Venice region, which makes it highly coveted in other areas of Italy.

Venetian cuisine as a whole is, in fact, coveted by the rest of the country. While mainland Italy shares recipes and ingredients, Venice has retained some of its island isolationism, that allows it to preserve its distinct recipes and traditions. For many, this is a blessing, that will allow future generations of Italians (alongside future groups of tourists) to savor Venetian cooking at its most authentic.