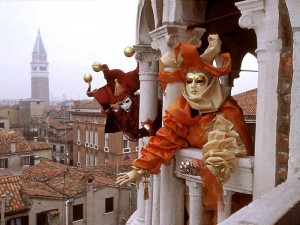 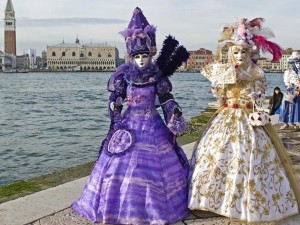 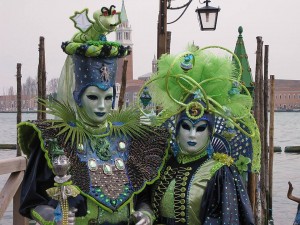 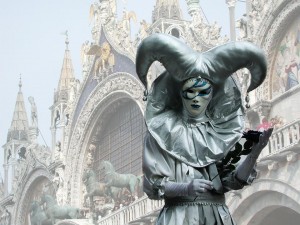 Venetian Carnival, an intriguing mix of gorgeous masquerades, street fairs, high-end balls, and tourist craze set against the beautiful backdrop of Venice, is one of the most famous and highly anticipated events in the world. The Venetian Carnival in its present form has been celebrated since 1979 when Italian government and Venetian civic society decided to revive it as an attempt to re-ignite interest in Venice and its rich traditions. However, the original Venetian Carnival has a long history that dates back to the 12th century, if not earlier, and many of the traditions and glamorous highlights of today’s Carnival come straight from the Middle Ages.


Origins of the Venetian Carnival

Many scholars agree that Venetian Carnival has its roots in Christian tradition and that it has likely evolved as a way for people to indulge in life’s pleasures and have fun in the days before the solemn period of Christian Lent (a time of sorrow and reflection leading up to the Holy Week). One of the theories is that the Italian word “Carnevale” comes from the two Latin words “carne” meaning meat, and “vale” meaning farewell or goodbye, signifying the fact that during Lent people had to fast, avoid temptation, and give up life’s luxuries, in order to concentrate on prayer, reflection, and self-denial.
However, the Carnival’s history likely runs even deeper. Venice was founded by Romans escaping barbarians and built on the remains of crumbling Roman Empire. As such, it has deep roots going all the way back into Roman and even Greek history. Hence, Roman celebration of Saturnalia and Greek Dionysian festival before it are thought to have played a role in Venetians’ desire for a festival that allows people to be free from social norms. Saturnalia in ancient Rome was a time of complete break from normal social order and hierarchical boundaries, when masked slaves and Roman citizens alike celebrated with music, dances, symbolic acts, and orgies.

The first historical mentions of Carnival in Venice date back to 1092 when it appeared in the charter of Doge Faliero. However the event that gave rise to the Carnival’s key traditions was the victory of Doge Vitale Michieli over Ulrich II, the Patriarch of Aquileia, in 1162. In that year Ulric II captured the city of Grado, a key territory on Venetian mainland which had been the source of much conflict between Ulrich II, the Venetian Doge, and the Holy Roman Emperor Frederic Barbarossa. In response to Ulrich’s act Venetian doge Vitale Michieli immediately sent fleet to re-capture Grado, in the process capturing Ulrich II, his 12 key vassals and hundreds of his soldiers, who were then brought back to Venice as prisoners. Eventually the Pope intervened asking for peace and Ulrich’s release. As a condition of his release, Ulrich was forced to pay a yearly tribute to the Venetian Republic of one bull, 12 pigs, and 300 loaves of bread. In commemoration of this important Venetian victory ceremonial slaughtering of the bull, representing Ulrich, and the pigs, representing his vassals, occurred on St. Mark’s square every year around Shrove Thursday (known as Zioba Grasso in Venetian dialect), and gave rise to a cherished Carnival tradition kept for hundreds of years since. The Carnival was designated as an official public holiday starting the day before Lent by the order of Senate in 1296.

The earliest documentation discussing using masks during Carnival celebrations dates back to 1268, when the practice of masked men throwing eggs at ladies during Carnival was outlawed by Venetian Council. Venice was known to have one of the strictest social hierarchies in Europe, and the use of masks during Carnival provided a much-needed peaceful outlet for the hostile feelings of the lower social classes, allowing them to engage in otherwise forbidden activities such as mocking the government, making fun of the aristocracy, or mixing up with high society. The prominent Venetian citizens, visiting merchants and politicians, and members of nobility also enjoyed wearing masks and costumes, for it allowed them to engage in frivolous behavior and socially or religiously inappropriate activities without fear of being recognized. As Venice gained prominence as a wealthy cultural and commercial center in the Middle Ages, the Carnival with its frivolous and easy-going nature started to attract lots of visitors from all corners of Europe and beyond, turning Venice into one of the world’s most visited tourist destinations of the time.

Venice’s famous masked balls, fairs and fun street scenes gave rise to the impromptu street performances in mask, which later came to be known as Comedie dell’Arte. A form of theater, Comedie dell’Arte started in the 16th century with travelling theater companies presenting short plays using a well-known set of masks and costumes and playing out amusing scenes around the topics of love, marriage, adultery, social class mishaps, master-servant relations, and other popular themes. The quick wit and the fun content of these plays made them wildly popular, and Comedie dell’Arte flourished till the 18th century. The masks and characters used in these performances, such as Harlequin, Colombina, Pantaloon, Pulcinella are well-known to this day and lay at the basis of rich theatrical and literary heritage of many European cultures.

As Venetian Carnival became more popular it started to attract shady characters with darker intentions, and criminal deeds started to happen, especially under the cover of night. Men could get dressed as women or as servants of faith, allowing them to enter convents and act inappropriately. Casinos attracted masked gamblers, who sometimes fled creditors, and masked men easily concealing weapons under costume could cause mayhem on the streets of Venice without being recognized. This led to a variety of prohibitive decrees, including the ban on costumes and masks at night in 1339, and the 15th century ban on entering holy places wearing masks, followed by later bans on concealing dangerous objects and weapons under Carnival costume.

The Fall and Revival of Venetian Carnival

In 1797 Venetian Republic was conquered by Napoleon and lost its independence. This led to a long period of Venetian decline – political, economic, and cultural- and to the end of the Carnival. Year 1797 saw the last Venetian Carnival, as Napoleon prohibited wearing Venetian Carnival costumes, except during private parties and for the Ballo della Cavalchina in Teatro La Fenice. As a result, the Carnival ceased to exist for nearly 200 years until in 1967 Venetians started to organize first costumed private parties in an attempt to revive Venice’s rich cultural heritage. In 1979 Italian Government officially brought back the Carnival as part of its efforts to revive Venice’s economy and culture and bring back the tourists. This was a very successful initiative as the Carnival drew a large following in Venice and beyond and became the ground for revival of Venetian traditions and crafts, including mask-making and theater. Today the tradition of annual Venetian Carnival continues with a new theme announced every year, rich masks and costumes, lavish parties, and the atmosphere of a unique and beautiful celebration that can only be felt in Venice.